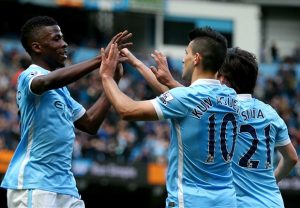 Kelechi Iheanacho scored a brace as Manchester City edged closer to Champions League qualification with a comfortable victory at home to Stoke City.

After a tame start, the hosts took the lead on 35 minutes when Fernando headed home from a Jesus Navas corner.

They doubled their advantage shortly before the break when Ryan Shawcross pulled back Iheanacho in the area and Sergio Aguero stepped up to convert the penalty, taking his Premier League goal tally for the season to 23.

Manuel Pellegrini’s men extended their advantage on 64 minutes when Pablo Zabaleta broke down the flank and squared for Iheanacho to slot home.

The Nigerian capped an impressive outing with his second goal 11 minutes later when he latched onto a Wilfried Bony pass and skipped around substitute keeper Jakob Haugaard to slot home.

City have now claimed four wins and a draw in their last five league games and the victory sees them move five points clear of fifth-placed Manchester United, who have a game in hand.

Stoke, meanwhile, have now lost three league games in succession, conceding 12 goals, to all but end their hopes of Europa League qualification.