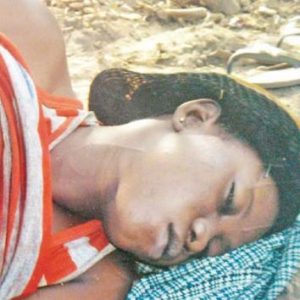 A man in his 20s, Okala Jo­seph, is alleged to have shot his wife dead, in the presence of his wife’s mother.

He allegedly shot the victim, 18-year-old Helen Precious for refusing to have more babies by aborting the babies.

As Sunday Sun gathered from the Commissioner of Police, Nasarawa State Police Command, Mr. Lawal Shehu, the horrible incident happened on April 4, 2016 around 2 pm when Joseph allegedly went to the village of his in-laws, where he learnt that his wife and moth­er-in-law had gone to the farm. Okala went to his mother-in-law’s farm at Nindama village in Kokona LGA Nasarawa State and shot his wife in the presence of her mother and younger sister and then left the scene.

He was allegedly wearing a face mask when he shot his wife and wanted to escape before he was arrested by policemen at­tached to Garaku Police station.

The suspect, Joseph Okala told Sunday Sun that he was the one who killed his wife. “My wife denied me going to school. My father warned me against marrying her rather I should go to school. Since my late wife insisted that I must marry her. I have to deny my fa­ther and abandon my education to marry my late wife in 2013. I was blessed with one kid, a baby boy.

“My late wife has been preg­nant for me but she would abort the pregnancy, she has done the abortion severally. It was the senior brother of my wife who came on December 25, 2015 and packed my wife’s luggage and took her away from my house, we have been quarrelling over the matter,” he said.

The suspect who hailed from Kokona Local Government Area; Nasarawa State added that it was four months later after his late wife left his house. “It was April 4, 2016 around 2:00pm I went to Nindama village, my wife’s mother’s village and met them in the farm; I went in anger and took my dane gun and shot my wife dead in the present of her mother and I wanted to escaped before the policemen arrested me.

I never regret killing my wife, she has denied me education. I am a farmer in Angwan Sarki village and I am

struggling to have a better life,” he said.

CP Lawal Shehu added that the policemen in Garaku Police Station had recovered the dane gun Joseph used to shoot his wife.

The Police Public Relation Officer, ASP Numan Umaru Ismaila from Nasarawa Com­mand has warned the public not to take laws into their hands but rather always report any grievance to the nearest Police Station.

He said the case of Joseph Okala who killed his wife was culpable homicide.

The family of the deceased wife said they wanted justice to be done. A relative iden­tified simply as Garba said, “The man has been maltreat­ing our daughter. We had to send her elder brother to pack her luggage from the hus­band’s house on December 25, 2015.

“Suddenly we saw the husband in my mother’s farm with her wife and he shot her dead without a reason. We want justice to be done. The policemen have released our daughter’s corpse to us and we have buried her on April 8, 2016.”

CP Lawal Shehu stated that the suspect Joseph Okala would be charged to court for culpable homicide after inves­tigation had been concluded. -The Sun