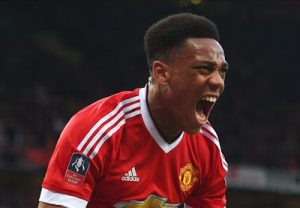 Martial set up Marouane Fellaini to score against his former club in the 34th minute, but after United goalkeeper David de Gea had superbly saved a penalty from Romelu Lukaku, Chris Smalling’s 75th-minute own goal looked to have sent the semi-final to extra time. Martial, however, had other ideas, the £36 million ($51.9 million, 46.2 million euros) close-season signing from Monaco charging into the box and finishing coolly to preserve manager Louis van Gaal’s hopes of ending a difficult season by orchestrating United’s first FA Cup success since 2004.

United will be favourites in the May 21 final, when they will encounter either Crystal Palace or Watford, and Van Gaal will also hope that Martial’s late strike serves to give his side a lift in their quest for Champions League qualification.

But while Van Gaal can look forward to a return trip to England’s national stadium next month, his beaten counterpart Roberto Martinez faces a bleak future, the FA Cup having represented his last hope of salvaging Everton’s season. Everton skipper Phil Jagielka overcame a hamstring injury to start at centre-back, but the absence of Seamus Coleman obliged midfielder Muhamed Besic to slot in at right-back in a defence that quickly found itself under examination.

With Wayne Rooney dictating the play from a deep midfield role and a front three of Martial, Marcus Rashford and Jesse Lingard flitting around like mosquitoes, United created a stream of chances before unsurprisingly taking the lead. Everton goalkeeper Joel Robles had already saved from Lingard, Rashford and Rooney, while Marcos Rojo had glanced a header wide and Martial had blazed over, by the time the latter powered to the left-hand byline and cut the ball back for Fellaini to trundle a shot home at the near post.

But although United seemed to have set up semi-permanent camp in the opposing half, Lukaku had spurned two clear chances for Everton before his side fell behind, with one effort cleared off the line by Rooney and the other comfortably blocked by De Gea.

The Belgian’s aim did not improve in the second half. After exchanging passes with Aaron Lennon, Ross Barkley was just about to shoot from the left-hand edge of the six-yard box when Timothy Fosu-Mensah came through him to take the ball. Referee Anthony Taylor pointed to the spot, but Lukaku’s firm penalty towards the bottom-left corner was brilliantly palmed wide by De Gea. United were rattled and Everton looked to capitalise, with Tom Cleverley slamming Lennon’s cross wide and then crossing for Lukaku to head over.

United might have won a penalty of their own moments later, when Fellaini’s close-range effort was prevented from crossing the line by the diving Jagielka’s right arm, but Taylor did not see it and within minutes Everton were level.

Gerard Deulofeu had only been on the pitch for five minutes when he whipped a cross into the United box from the right and saw Smalling slice it past a startled De Gea at his near post. At that stage, Everton looked the more likely side to prevail, with De Gea thwarting Deulofeu and Lukaku heading wide. But in the third and final minute of stoppage time, Martial charged infield from the left, played a one-two with substitute Ander Herrera and then steered home to send the United end into raptures.

Pele not in hospital, says spokesman

Fireworks gentle up Sydney as Asia takes first step into 2018