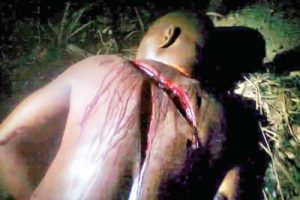 After the invasion, a National Youth Service Corps member and elderly men, among many others,  lay dead.

A native of the area, Hyman Ugwu, told Daily Sun that local vigilantes have combed the bushes and recovered 15 bodies.

He said the villagers had retired to their beds when the assailants, armed with sophisticated weapons, invaded the area.

Cries of distress reportedly rent the air as the arsonists invaders went on rampage, hacked elderly people with cutlasses and shot sporadically at women and children who attempted to flee from the onslaught.

But, the Police said only six people died in the attack.

The traumatised cleric and his family reportedly fled into the nearby bush, where they spent the night.

Dead bodies littered the bushes, as local vigilante searched for survivors. Among the dead were: Mr Maxwell Eze, Mr Akogwu Utazi, an elderly man from Ebo Village, Raphael Irege from Enugu Nimbo, Adeja Nwa Agu from Ekwuru Nimbo, a corper, whose name could not be ascertained, another victim popularly known as Abro, among others.

Another eyewitness, Pastor John, said natives spent the night in the bush, as the herdsmen unleashed mayhem on the community for hours.

The community was a ghost town on Monday as natives fled to neighbouring Nkpologu, Uvuru communities for refuge.

When he was contacted, Enugu State Commissioner of Police, Mr Nwodibo Ekechukwu, who spoke to Daily Sun from Nimbo, confirmed the attack and added that some escaped with bullet wounds.

According to Ekechukwu, only six persons were killed by the fleeing herdsmen, the house of the priest of Christ the King Church was razed and two vehicles burnt.

When asked what could have caused the attack, he said that could only be determined after investigation. The herdsmen had, earlier this year attacked Abbi community, where a woman and her younger brother were slaughtered. Further investigation indicated that over 15 people were abducted in the area while suspected herdsmen raped some married women in the farmland.

Chairman of the Transition Committee in Uzo-Uwani, Cornel Onwubuya, also confirmed the attack in a telephone interview with Daily Sun. He said he was visiting the affected community to ascertain the cause of the attack and casualty figure. -The Sun