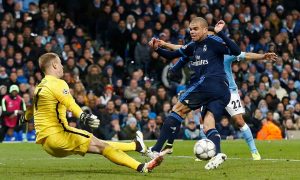 No Cristiano Ronaldo, an out-of-sorts Karim Benzema and an injured David Silva. It all added up to a slightly disappointing evening at the City of Manchester Stadium.

Not an ideal result for City, then, especially with Ronaldo missing and Benzema out of sorts. An opportunity missed. But they began to rock a little towards the end of that second half, and Real could easily have snatched a precious away goal that would have made things awfully difficult at the Bernabeu. (Hats off to the excellent Joe Hart for keeping it goalless.) So as things stand, they’re still right in this tie, just 90, perhaps 120 minutes plus penalties, away from their first-ever European Cup final! The dream is not yet out of reach.