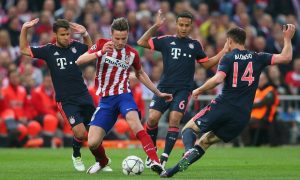 Atletico Madrid pipped Bayern Munich 1-0 in the first leg of their UEFA Champions League semifinal at the Vicente Calderon on Wednesday.

Atletico will take a slight advantage to the Allianz Arena for the second leg thanks to a wonderful Saul Niguez solo effort, as their quest to reach a second final in three years grows more likely.

The home side piled on the pressure in the opening minutes, not allowing Bayern to play out of their own half in the face of Atletico’s high pressing.

Diego Simeone’s men were rewarded for their persistence in the 11th minute. Midfielder Saul danced his way through a number of Bayern defenders before curling an unstoppable left-footed shot around Manuel Neuer and inside the diving German goalkeeper’s far post.

Bayern then immediately tried to answer back, but a point-blank looping header from Arturo Vidal was cleared up and over the Atletico goal by a leaping Jose Gimenez header.

Douglas Costa went close from a free kick situation on the right touch-line in the 25th minute, sending Jan Oblak scrambling to his near post only for the ball to hit the side netting.

Antoine Griezmann nearly doubled the lead five minutes later, forcing a kick-save out of Neuer from a tight angle after racing behind the Bayern defence.

Though Bayern ended the half with 71 percent possession, they could only manage one shot on the Atletico goal.

David Alaba came close to equalising in the 56th through a spectacular, dipping long-range shot that was only kept out by the crossbar before falling back into play.

Bayern were nearly in again from a corner just a minute later — Javi Martinez’s header from a corner kick well saved by Oblak who got down well to catch.

The following minutes saw Robert Lewandowski shoot across Oblak’s net from a Vidal layoff, and Costa fire a left-footed chip over the Atleti net after getting in behind the Atleti defence.

Vidal tested Oblak from deep in the 74th minute, with his powerful shot parried away from danger.

Seconds later, Atleti were nearly in again from a swift counterattack, with Fernando Torres’ outside-of-the boot shot beating Neuer but not the far post — the ball fell for Koke but he could only shoot straight at Neuer.

Medhi Benatia and Vidal squandered good chances in the final moments of stoppage time, but Atleti held out for the hard-fought win.

Foundation companions NAN on on most cancers consciousness