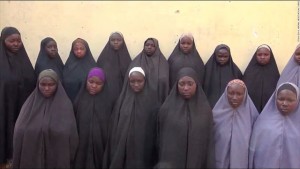 Three mothers of schoolgirls abducted from Chibok in northeast Nigeria two years ago said they had identified their daughters in a video released by Islamist group Boko Haram, the first possible sighting of the girls since a video in May 2014.

About 15 girls featured in the video released to local officials on Tuesday, saying they were from the Government Girls Secondary School in Chibok and pleading with the Nigerian government to cooperate with Boko Haram on their release.

The girls were filmed saying they were being treated well but wanted to go home and be with their families.

Various false leads have raised hopes of finding the girls but their whereabouts remains unknown.

Mothers Rifkatu Ayuba and Mary Ishaya said they recognised their daughters, Saratu and Hauwa, in the video, while a third mother, Yana Galang, identified five of the missing girls.

“The girls were looking very, very well,” Mrs. Galang said in a telephone interview with the Thomson Reuters Foundation after viewing the video at a screening organised by local officials in Maiduguri, capital of Borno state in northeast Nigeria.

The three mothers were invited to the viewing by the chairman of Chibok local government area, Bana Lawan, who confirmed that he paid their travel costs to Maiduguri, the state capital.

The kidnapping of the girls has become a political issue in Nigeria with the government and military criticised for their handling of the incident and failing to track down the girls.

“They were definitely our daughters … all we want is for the government to bring back our girls,” said Galang, adding all the girls were wearing hijabs in the video.

No member of Boko Haram was visible in the video and local officials were not immediately available to give details on how they received the video.

“We only heard a man’s voice and saw his finger pointing at the girls one after the other,” Mrs. Galang said.

She said the girls in the video spoke in Hausa, a language widely spoken in Nigeria, and Kibaku, the local Chibok language.

Mrs. Galang said one mother, Mrs. Ayuba, was relieved to see her daughter as she had heard a rumour shortly after the kidnapping that her daughter had been killed by Boko Haram.

“She was very happy to see her in the video … her daughter is alive,” Mrs. Galang said.

About 2,000 girls and boys have been abducted by the Boko Haram since 2014, with many used as sex slaves, fighters and even suicide bombers, according to Amnesty International.

This week, a report from the United Nations Children’s Fund (UNICEF) said Boko Haram child suicide bombings have surged 11-fold in West Africa over the last year, with children as young as 8, mostly girls, used to bomb schools and markets.

UNICEF said there were 44 child suicide bombings in West Africa in 2015, up from four in 2014, mostly in Cameroon and Nigeria. -Premium Times