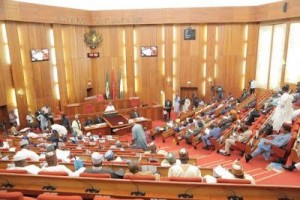 The Appropriation Committees of the Senate and House of Representatives have submitted the details of the 2016 Appropriation Bill to the Clerk of the National Assembly for onward transmission to the Presidency.

In a statement jointly signed by the chairmen of the Appropriation Committees of the Senate and House of Representatives, Danjuma Goje and Abdulmumin Jibrin respectively, the committees thanked Nigerians for their patience and understanding.

The chairmen said it took their committees extra weeks to get the details ready so we could correct all the inconsistencies, errors, omissions and padding in the document submitted to them in December last year.

“Being the most important economic policy tool of government, the budget provides a comprehensive statement of our priorities as a nation.

“And as representatives of the people, the National Assembly remains the appropriate place to ensure that the details of such a document best match our national goals and aspirations.

“Therefore, what we have been doing in these past few weeks is to balance the projections for revenue against the estimates for expenditure based on the reality of our situation today.

“Unfortunately, that task has been made very difficult by the sloppy manner in which the 2016 Appropriation Bill was prepared by the executive such that many of the officials who came before our various committees practically disowned the inputs from their own departments and ministries.

“In most instances, and across several agencies, the bill that was initially presented to us failed in many respects to connect with the policy thrust of the government and the needs of our people.

“That is aside the fact that most of the figures simply did not just add up. It was one of the most controversial budgets that ever came to the National Assembly from the Executive.

“Fortunately, President Muhammadu Buhari, who we must commend for showing leadership, intervened and that helped in resolving what had become a serious logjam.

“Some officials in the executive branch have also been removed from their duty posts because of these glaring lapses. That happened because the president took direct responsibility and got involved in the process, not only to ensure synergy between the executive and the legislature but also so that we could both arrive at a budget that is implementable for the good of all Nigerians.

“However, it is important to stress that this is the first time we would have a transition from the ruling political party to the opposition, so some of these problems are understandable.

“We therefore believe that the executive will learn from the mistakes of this year, going forward. But we must also commend the leadership of the National Assembly as well as members of our own committees who have had to endure sleepless nights, especially in recent weeks.

“To the extent that the budget drafting phase is a long process, the committee stage provides the most significant opportunity for members of the public, including the media and civil society organizations to make their own contributions and we have taken into account all shades of opinions in arriving at the breakdown, which is now with the executive.

“Now that the 2016 budget has been passed, our next role is to add value to the process through legislative oversight functions that enable us to ensure adherence to priorities while monitoring effective allocation of resources. But there is a lesson that should not be lost on the executive given the current experience.

“We specifically urge the president to abide strictly with provisions of the Fiscal Responsibility Act which stipulates that the appropriation bill be presented early so that there could be sufficient time for interactive sessions between the executive and the legislature before the commencement of committee hearings.

“That way, we can avoid some of the controversies that dogged this year’s budget and add value to the entire process,” the statement added. -Premium Times