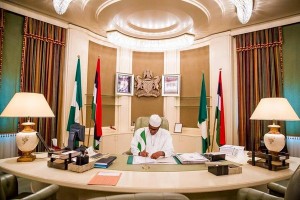 The Presidency has confronted the leadership of the National Assembly, NASS, with details of distortions orchestrated by the lawmakers in the 2016 budget and asked them to urgently address them in the interest of the nation.

The Presidency handed down the plea at a crucial meeting summoned by President Muhammadu Buhari on Saturday night with the Vice President, Yemi Osinbajo; Senate President, Dr. Bukola Saraki and the House of Representatives Speaker, Yakubu Dogara, and ministers in attendance.

Sources close to the meeting, which took place at the Presidential Villa, revealed that the President used the opportunity of the meeting to review the budget with the leadership of the NASS and highlighted the areas of concern to his administration.

However, the House of Representatives insisted that what it did was in tandem with President Buhari’s change agenda.

In particular, the president complained to the leadership of the legislature that the huge sums of money the lawmakers removed from key areas of infrastructure, agricultural and socio-economic development and added to non-essential areas would derail the agenda of his administration.

The president was said to have expressed regret that it amounted to a slap on his change agenda for the money meant for the strategic Calabar-Lagos Coastal Railway project and major agricultural projects to be removed by the lawmakers when the administration was trying to open up the country and provide mass transportation scheme for goods and services.

The meeting was called after ministers had spent the night to rush through the details of the budget which the lawmakers transmitted to the Presidency only last Thursday. The ministers, it was learned, came to the conclusion that their budget had been significantly distorted and that it would be impossible for them to make the needed change if the budget was accepted the way it was given to them by the NASS.

For that reason, the presidency has asked leadership of the NASS to take back the document and rework it to accommodate the key national projects, which they removed and to eliminate the ones inserted by them to enable the president assent to the budget. Alternatively, the president would sign the budget as a formality and introduce a supplementary budget to remove the offending items and to reflect his wish for Nigerians.

Among the offending discoveries in the budget details, which the President is uncomfortable with are the huge sums of money taken away from key projects and added to constituency projects of the lawmakers, most of which were never discussed or proposed by the executive.

Other infractions noticeable in the budget details are:

* N4 billion removed from Ministry of Health budget and added to Code of Conduct Tribunal
* Cost of 80 illegal roads without designs added to Works budget, 30 of them not Federal
* Money meant for Works, power transmission, diverted by lawmakers for tricycles, town halls, boreholes in their constituencies
* 73 illegal projects added to Education budget – no designs available for the projects, and no tenders conducted
* Lawmakers slashed money for poor students by 50% in Education budget and added same to their states constituencies.

It was gathered that although the N60 billion meant for the Calabar-Lagos rail budget was not in the original budget, the Budget and National Planning Minister, Senator Udoma Udo Udoma, successfully defended and got it included in the amended budget.

President Muhammadu Buhari, who left Abuja for Beijing, China, last night, to press for more financial support for the country, was said to be working on the premise that the NASS would rework the budget to meet his expectation for assent upon his return within the week. Lawmakers, especially those who were schemed out by the leadership in the sharing of the constituency projects are upset by the discovery and are likely to confront the beneficiaries as they resume today for plenary.

Meanwhile, some Senators and members of the House of Representatives were divided, yesterday, over refusal of President Muhammadu Buhari to assent to the Budget. For instance, Senator John Enoh and Chairman House of Representatives Committee on Appropriation, Abdulmunin Jibrin, disagreed over the inclusion of the rail project in the budget. While Enoh said it was included and wondered who removed it, Jibrin said the Lagos-Calabar rail project was never included. -Vanguard