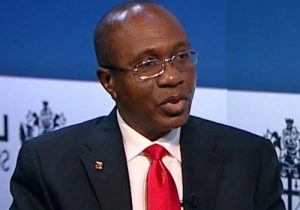 The CBN Governor, Godwin Emefiele, said the Federal Government is talking with China to start importing some of its own items from Nigeria.

According to Emefiele, so this will help to reduce the gulf in trading between the two countries.

Speaking at a press conference at the World Bank headquarters in Washington, on the last day of the 2016 World Bank/IMF spring meeting, he also said part of Nigeria’s deal with China is that the country becomes the Asian country’s trading hub in West Africa.

“And Nigeria, the mandate that we signed is for us to be appointed as the trading hub in the West African sub region. In all, we expect that it is going to be mutually beneficial.

“We are talking to China so that it would also be importing some of its own items from Nigeria, so that the trading balance can be sort of reduced.

Emefiele added that the CBN could not continue with indeterminate adjustment (devaluation) of the currency, without taking necessary structural reforms.

“But we are saying this time we’ve done an adjustment and we are following it up with structural reform, where we are saying we must diversify the economy away from depending on oil.

“I’ve said it that we have seen people who are coming in an investing, during the china trip, we saw people who said they can now come in instead of exporting those items into Nigeria, they can now bring those plants into Nigeria and begin to produce those things in Nigeria because our climate is good.

“I repeat, what is the raw material for fertilizer? It is gas. We have it in large quantity; when you bring in the plant, you don’t need to import any raw material again. We are seeing the green light at the end of the tunnel; we just want people to show understanding.” -Nigerianeye