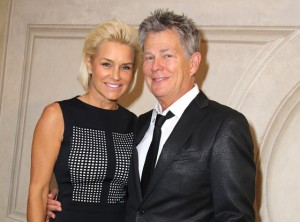 When watching Real Housewives of Beverly Hills this season, there were some things fans were totally expecting.

Yes, you’re going to get your fair share of drama. Sure, Lisa Vanderpump will discover an irresistible new pet she wants to take home immediately. And the odds are in our favor that there will be a dinner disaster on vacation.

“We were just two normal human beings that were going through the ups and downs of a marriage while [battling chronic illness,] business, children, step-children, life,” Yolanda shared with cast member and friend Erika Girardi. “It was just really tough. If you stop making each other happy, you shouldn’t be together.”

“My life has changed 180 degrees,” she continued. “In time, David and I are going to be great friends. Just because the marriage didn’t work anymore, it didn’t change the fact that I still love him.”

After the announcement first made news the same day as the show’s season premiere, viewers were hoping that the next 20 episodes would shed some light on why one of the Bravo franchise’s most beloved couples called it quits.

While there was a minor speed bump here and there, the split ultimately remains quite shocking to avid watchers.

Every time Yolanda endured a surgery or operation in hopes of curing her Lyme disease, it was David who was by her side adjusting her IVs and giving her a kiss as she rested up in bed.

“It’s so important for me to have David here by my side at this part of my journey and I couldn’t imagine doing it without him,” Yolanda confessed during the season. “He’s great. He was super nurse.”

Later on in the season, the pair appeared more than a little excited to hold a dinner party for the cast. Whether holding hands while riding in their limousine, to dancing together during a surprise performance from Andrea Bocelli, viewers didn’t see any warning signs.

But perhaps the greatest evidence of a strong couple occurred in episodes aired just last month when the pair headed to New York City to attend the Global Lyme Alliance Awards. Before Yolanda was honored for her contributions to the Lyme disease community, the pair hosted an intimate gathering with friends and cast members where the love was still visible.

Yolanda added, “I would like to make a toast…To my husband, thank you for making actions speak louder than words. You married me and down I went. I’m so happy to know you’re still here four years later and I love you. I’m going to make it up to you.”

Ultimately, it wasn’t enough for the pair who later decided to go their separate ways. While we may never know the real reason for the split, cameras captured an emotional Yolanda who appeared to take some responsibility for the end of her marriage.

“You know David has lost his wingman. He married a woman who was a social butterfly, always out doing and doing. Then all of a sudden I get sick,” she confessed. “I am a shell of the woman I used to be so yes he gets impatient. We’ve been trying to work through all the ups and downs. This is my journey but unfortunately, it’s out of my control.”

For some reason, some viewers still think there is more to this all-to-real story.

Real Housewives of Beverly Hills airs Tuesday nights at 9 p.m. only on Bravo.