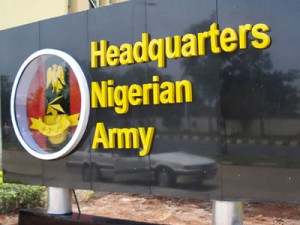 Defence Headquarters yesterday asked Nigerians to discountenance the latest video by the Boko Haram terrorists group saying the clip showing 15 girls will not in anyway hamper its offensive against the terrorists.

The DHQ says the video was a ploy to distract the military and security agencies from carrying on the good work of flushing out the terrorists from the country.

Acting director, Defence information Brigadier-General Abubakar Rabe said “This is the era of social media and anybody can do anything.”

While confirming that the military has seen the video clip, he said: “In as much as we saw it, nobody can give an authentication. Secondly, we are not even bothered about that clip because we are focusing on our operations and not the video and we don’t want to in anyway be dragged into media war with these terrorists. What we are doing is physical war, champion the course of this fight and finish it quickly. And more so, this is something that they showed only 15 girls and we are talking about over 200 girls and they are showing us only 15; so that gives some little doubts.

“But whatever it is, we are not bothered because it cannot impact in anyway in our operations. It’s just like somebody who is dying, you know he can do anything to remain alive. So whether we believe the video or not is not important, the most important thing is that it doesn’t have any impact on our operations. We will go on with our operations not to rescue only the Chibok girls but every person who has been captured because in recent times we have rescued so many captives.”

Governor of Borno State, Kashim Shettima and renowned layer, Itse Sagay also reacterd to the video. While Shettima denied knowledge of the existence of the video he says it portends a good omen for the abducted schoolgirls.

“I am not aware of the existence of this video, but we are not surprised. That is what we had been saying, that the girls are alive. Based on security analysis you might not get them in one group, they might have been dispersed into several cells. But it had been our familiar drift that the girls are alive and well. It is our fervent hope and prayers that very soon the girls will return to their parents.”

Prof. Sagay said the clip gives hope that the victims are still alive, but urged the Federal Government to do everything, including negotiation and force, to rescue the girls as time and patience were running out.

“I understand that they (schoolgirls) appeared in the video. So, that shows they are alive; I don’t think that is controversial. The main issue is how to get them back; that is the real issue,” he said.

Pakistani-born teenage the youngest-ever Nobel Prize laureate Malala Yousafzai has thrown an open challenged to President Buhari and everyone who can help rescue the Chibok girls to act now.

“Dear mothers and fathers, I write this letter with a heavy heart, knowing you have endured another year separated from your daughters. I think of you every day since we first met two years ago — and join millions of people around the world in praying for the safety and swift return of your girls.”

“As I did last year, I call on President Buhari of Nigeria — and everyone who can help rescue the Chibok girls — to act now. Would a president give up the fight for his own daughter? These girls are just as precious to their families. Parents, thank you for having the courage to send your daughters to school. My dream is that one day they will come home, finish their education and choose their futures for themselves. I pray for the day when you can embrace your girls again.” -The Sun