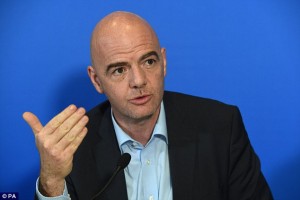 In a letter entitled, “Verdict of the Jos High Court,” and addressed to Nigeria Football Federation (NFF) President, Amaju Pinnick, FIFA warned that the Jos Federal High Court decision, “if implemented, would likely be considered as an interference in the internal affairs of the NFF and the case would be brought to the highest authorities of FIFA for consideration of sanctions, including the suspension of the NFF.”

The letter signed by FIFA’s acting Secretary General, Markus Kattner, read in part: “We acknowledge receipt of your correspondence dated April 8, 2016 with regard to the ruling of the Federal High Court in Jos, which apparently nullified the elections of 30 September 2014 of the Nigerian Football Federation (NFF).

“In this respect, and first of all, we would like to remind you that according to articles 13 and 17 of the FIFA Statutes, all member associations have to manage their affairs independently and with no influence from third parties. In addition and according to article 68 of the FIFA Statutes, recourse to ordinary courts of law is prohibited unless specifically provided for in the FIFA regulations.

“Furthermore, it is the duty of each member association to ensure that these provisions are implemented by its members and possibly take sanctions against those which fail to respect these obligations.

“Lastly, we would like to stress that the plaintiff in question already filed an appeal in relation to the same matter with the highest judicial sport authorities, the Court of Arbitration for Sport (CAS), and that said appeal was dismissed by the CAS on May 18 2015.”

The body asked the NFF to keep it informed of any new development on the matter.

The Guardian gathered that the FIFA integrity committee was originally billed to come to Nigeria on a fact finding tour this week, but it was not clear as at press time if the committee would still arrive the country following the latest development.

Yesterday the gates of the NFF’s Glass House secretariat were locked to its staffers allegedly on the orders of Sports Minister, Solomon Dalung. -Guardian