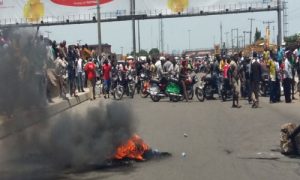 There was traffic along the ever busy Oshodi- Apapa expressway yesterday when residents in the axis blocked the road to protest killing of a tanker driver identified as Salisu Sani by some officials of the Lagos State Traffic Management Authority  (LASTMA).

Our correspondent gathered that the rampaging youths resorted to burning tyres on the expressway to register their displeasure over the incident which occurred at Sanya bus stop area of the expressway .

Witnesses claimed that the driver of the tanker marked ABJ 758XD laden with Premium Motor Spirit (PMS) parked his truck beside Port Terminal to observe his prayers when the LASTMA team numbering about four clamped down on him.

The officials were said accosted the apprentice identified as Nurudeen Abdulahi who was also praying on the culvert demanding whereabouts of his driver.

Abdulahi told journalists that after he showed them where his driver was, “They were arguing. I think it was about money. As the driver and one of the LASTMA men were arguing, another one entered the trailer and was driving it off.

“The driver rushed down and asked the man why he was driving his tanker. He told the man that his tanker was on the service lane and that if he wanted to arrest him, he should have told him to come and drive his vehicle to wherever they wanted to take him.

“The man did not listen. He was still driving the tanker and so the driver ran and was climbing the vehicle through the passenger side.

“By this time, two of the LASTMA people have returned into their vehicle and they had driven off. So, as the driver mounted the trailer from the passenger side, the LASTMA man who was on the ground dragged his clothe, pulling him to the ground.

“As soon as he fell, the LASTMA vehicle that went to turn, crushed him on the head. As soon as the one on the ground saw that they have crushed him, he told the man on the steering that he was dead and they both entered the vehicle and all of them escaped, without parking the tanker well. I was the one who applied the hand brakes before taking my driver to the hospital.

“There was only one tanker behind me. I saw what happened from where I said my prayers and when I rushed to the scene, my driver was bleeding from his head.