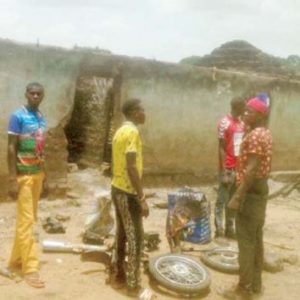 His Royal Highness, Dr. Godwin Ngbede Onah, the Ad’Agatu in this interview with ROSE EJEMBI, in Makurdi, the Benue state capital on Wednesday expressed fears that his people in Agatu part of Benue are still not safe due to con­tinuous attacks from Fulani herdsmen.

What is the situation in your domain now? Do you fear another attack?

Last week, these fulani herdsmen still am­bushed and killed two boys in my domain. That is to tell you that they are still very much around and they are still attacking. There is nowhere for my people to settle especially those in the riverine Agatu area because the invading fulani herdsmen destroyed everything they had. The unfortunate situation is that these people are not indigenous fulanis that we know and I blame our security agencies for the porous nature of our borders. Our borders are very porous. Yesterday it was Agatu, today it is Enugu, tomorrow, it will be somewhere else if the situation is not quickly addressed. That is to tell you that nowhere is safe in this country anymore. The attack is here and there. All we want is peace.

The federal government must create ranches. These fulanis must also learn to stay in one place and take care of their cows without infringing on the rights of other Nigerians. The issue of trespassing on other people’s lands have always been the problem. You cannot forcefully take our land and give to a particular tribe as grazing reserve or route. Nigeria has grown past that.

Have your people returned home yet?

How can they return home when these Fu­lanis have killed us and destroyed everything we had? Those in the eastern Agatu have not gone home. Most of them are still living in IDP camps in Obagaji while over 5000 are scattered here and there in Makurdi after the Makurdi camp was closed. The houses are completely destroyed and set ablaze while our family pro­duce like yams, cassava and so on were given to their cows to eat. There is nothing to return back to. And of course, you know that the rains are here. How can they go back home when there is no shelter for them. The issue of security is another thing because these people keep coming back to unleash terror on my people. The few Agatu people who have so far returned home are daily living in fear of more attacks because my domain is still not safe.

We’re not responsible for the attacks, says national president of myatti allah

The umbrella body of Fulani headsmen in Nigeria, Mayetti Allah Cattle Breeding Asso­ciation of Nigeria( MACBAN) has declared that their members were not responsible for the se­ries of attacks launched on farming communi­ties across the Southern part of the country.

National President of MACBAN, Alhaji Muhammadu Kirawa, Ardon Zuru , who spoke to Saturday Sun on some of the recent confrontations in some parts of the country, acknowledged that these attacks were wor­risome and required urgent attention by the Federal Government.

He condemned the attacks and said that as a body, they were against criminality of any sort, irrespective of whether it was commit­ted by a Fulani or by any other person. He however noted that it was difficult to ascer­tain the actual identity of the perpetrators of these attacks, in terms of whether indeed the attacks were actually perpetrated by Fulani herdsmen or by some unknown persons with other motives disguising as Fulani tribes­men.

“Several attacks on some communities have been attributed to Fulani nomads, but the true situation is that many bad people disguised as Fulani to commit some of these crimes that were being associated to Fulani herdsmen” he toldSaturday Sun in Zaria.

He therefore argued that it was wrong for Nigerians to come to the conclusion, even without proof that all the criminal attacks were committed by Fulani herdsmen.

He was disgusted by growing misconcep­tion about the Fulani tribe among Nigerians, recalling that the tribe and their herdsmen were before now considered a peaceful and amiable.

“But we are now the subject of misconcep­tion, our good reputation has been distorted and maligned and now is the time to correct this wrong impression. It must be corrected henceforth”, he declared.

He lamented the destruction of the original cattle routes across the country, adding that the destruction of these routes had increased the chances of farmers/herdsmen clashes in many communities, some of which had metamorphosed into religious and ethnic violence in some parts of Nigeria.

He also blamed the federal and state gov­ernments for their refusal to collaborate with his association in the search for solution to the incessant attack on communities by sus­pected headsmen across the country.

Kirawa said the organization had made several efforts to get government involved in a joint discussion on the issue but gov­ernment appeared to have no interest in the matter.

According to him, there is no way govern­ment or security agencies can arrest the prob­lem of frequent violence and attacks without involving community heads and other rel­evant organizations.

He observed that, “We are ready to part­ner with government, but we are yet to be contacted by government or by security agency.’’

He urged the Federal Government to de­vote attention to Fulani herdsmen and im­prove the security of their cattle as a way of addressing the present challenges.

“It is disheartening to note that 90 per cent of the meat we consume comes from Fulani herdsman, yet nothing is being done by the government to better his life and opportuni­ties in Nigeria” he concluded.

Following continuing reports of attacks by “herdsmen” on communities across the country, particularly Monday’s attack on Ukpabi Nimbo in Enugu State, President Muhammadu Buhari has assured all Nigeri­ans, of his administration’s continued com­mitment to ensuring the safety of lives and property in all parts of the country.

A presidential statement on Wednesday said “President Buhari unreservedly con­demns the attack on Ukpabi Nimbo on other such acts of extreme violence against com­munities in other states of the Federation.

“Acting on the President’s directive, the Inspector-General of Police and heads of the nation’s other security agencies are already taking urgent steps to fully investigate the at­tacks, apprehend the perpetrators and bring them to justice.

Ending the recent upsurge of attacks on communities by herdsmen reportedly armed with sophisticated weapons is now a priority on the Buhari Administration’s agenda for enhanced national security and the Armed Forces and Police have clear instructions to take all necessary action to stop the carnage.

“In keeping with the President’s directive, the Inspector-General of Police, the General Officer Commanding the 82nd Division of the Nigerian Army and the Director of the Department of State Security in Enugu State have visited Ukapbi Nimbo to personally oversee investigations into the attack on the community and ongoing efforts to appre­hend the culprits.

“The President urges all Nigerians to remain calm and assured of his adminis­tration’s readiness to deploy all required personnel and resources to remove this new threat to the collective security of the na­tion.” -The Sun