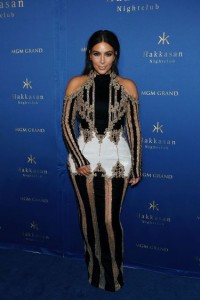 Kim Kardashian says it’s been a “challenge” to continue to lose weight after giving birth to her and Kanye West’s second child, son Saint West.

The 35-year-old Keeping Up With the Kardashians star had said in November, less than a month before giving birth to Saint, that she had gained 52 pounds and had six weeks left in her pregnancy. She has been working out and dieting to lose the weight. In January, she revealed she had lost 30 pounds and wanted to lose 40 more. She also said she was on the Atkins diet and had become a spokesmodel for the group.

“I mean it’s a challenge, it’s not easy at all,” Kim told E! News early Saturday at the Hakkasan nightclub. “We just got back from our family vacation and every day, we were up early working out.”

“You know, I have about 20 pounds to go,” she added. “You know, and it really is hard. It’s not easy. I gained a lot of weight and I have a lot to lose so you know I definitely feel good to a place where you know I’m comfortable again and things are starting to fit.”

Earlier this week, Kim and most of her family had jetted off to Vail, Colorado for a snow vacation.

Kim had also gone on the Atkins diet in 2013 after giving birth to her and Kanye’s eldest child, daughter North West.

“I think this time, more weight has come off quicker than last time because I kind of learned how to eat better,” she told E! News. “Last time, I worked out a little bit harder. This time I’m eating differently. So I’m doing the Atkins diet and it’s just like, I’m so militant about it that I just started working out really hard and I think that the mix of the two will help this last 20 pounds, hopefully, you know, fly off. I’m praying.”

At Hakkasan, Kim hosted a party celebrating the venue’s third anniversary. This marked her first official club appearance since giving birth to Saint. She wore an embellished Balmain gown.

Kim almost didn’t make it to Las Vegas; Her private plane was grounded in Los Angeles due to mechanical problems. She and her friends later boarded another flight. Kim Snapchatted the experience.

She also avoided some tasty temptation that could have derailed her diet; While her friends ordered some late-night Jack in the Box, Kim opted to go without.

During her interview with E! News, Kim also talked about North and how she’s been dealing with being a big sister.

“My daughter is still in the little jealous phase, and that’s really hard for me because she gets so jealous when I try to do anything with him, so I have to sneak moments with him or have my husband entertain her,” she said, adding, “There’s like attention and love for everybody.”