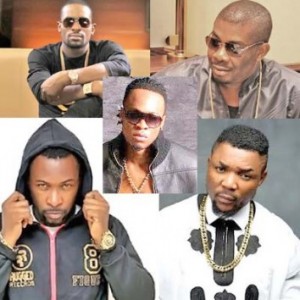 They are upwardly mobile, young, handsome and rich and have been romantically linked to dozens of beauti­ful women but despite their success, these hot Nigerian artistes show no sign they intend to get married and settle down any time soon. Today, Entertainer brings you the Nigerian music industry’s hottest bachelors.

Call him a play boy and you wouldn’t be far from the truth. And whether it’s by chance or design, D’banj only associates with rich and wealthy women. Ever since the 35 year-old hit the Nigerian music space with his debut single, Tongolo, he has continued to enthral members of the opposite sex. Today, listed among his conquests are Genevieve Nnaji, Ini Edo, Bonanag Matheba, Adama Indimi and Jenifer Obayuwana, all filthy rich women. And going by his antics, it’s obvious that marriage is obviously not a priority for him as he is showing no sign of settling down soon.

A couple of years ago when Wizkid hit the limelight with the release of his debut single, Holla @ ur Boi, it was obvious that the kid was headed for the top. Today with a string of hits to his credit, 25 year-old Wizkid has come of age. Though he has been linked to a couple of beauties and has two baby mamas, there seem to be no plans of settling down any time soon. Wizkid has a son with Oluwanishola Ogudugu and another lady, a Guinean and video vixen by name of Binta Diamond Dialo, re­cently posted pictures of her child she claims was fathered by Wizkid and named the child Ayodeji Ibrahim Balogun, after the starboy. Even Tania Omotayo, his girlfriend of many years seems to have fallen out with the singer judg­ing by their posts on social media.

At just 19, OBO singer and HKN Gang CEO, Davido, hit his first millions after he was signed up by MTN as its brand ambassador and ever since, the act has never looked back bombarding the Nigerian music scene with a string of hits. And if there is one thing he is known for, it’s his escapades with members of the faire sex. Recently he made headlines again after his stormy battle with his baby mama, Sophia, over custody of their daughter, Imade. At the climax of the drama which lasted a couple of weeks, Davido had declared that he could never marry Sophia Momodu no matter what happened because she was older than him. He also accused her of taking advantage of his innocence.

With almost two decades in entertainment and hav­ing thousands of adouring female fans, Ruggedman is yet to tie the knot. The rapper who hit the limelight after he dropped his controversial hit track, ‘Ehen’, which featured late singer, Nomoreloss, in an interview with a popular magazine a while ago revealed the reasons why he was yet to tie the knot.

Hear him: “There are a lot of girls out there but I don’t need a girl, I need a woman, a woman who know what responsibility is all about. It’s not just about facebook, instagram, and twitter. I need somebody who is real, who is responsible, and I really don’t want to date anybody in entertainment; it won’t work. You go out, she goes out, and we all know that we humans are jealous creatures. If you go out and your wife sees so many girls clamouring around or over you, you’ll say ‘it’s just work honey.’ But if you see a guy around her and she says ‘it’s just work honey,’ I can imagine how you would react.”

Since he hit limelight after the release of D’banj’s Tongolo in 2004, the career of music producer and Mavin boss, Don Jazzy, has been on a trajectory to the top of the industry where he remains one of the most dynamic music producers in Nigeria. However, mention romance and you run into a brick wall!

Don jazzy who has been instrumental in the making of a dozen stars and still counting, despite being Ambas­sador to a number of platforms and earning millions of naira and even getting mentioned among Forbes list for Africa’s most influential musicians for 2015 has remained elusive as far as his relationship with the opposite sex is concerned. Media shy Don Jazzy has not been romanti­cally linked with any woman yet. However, Tonto Dikeh is reported to have once sensationally declared in an interview that she was disvirgined by Don Jazzy.

Though 34 year-old Banky W had been around for a while, it was the remix of Rihanna’s Umbrella entitled Ebute Metta, which transformed his career forever. The CEO of Empire Mates Entertainment (EME) despite his success and his sex appeal has consistently denied being in a relationship or having an affair. A while ago during a show in Mauritius, Banky W had announced to his fans that he was not in a relationship and did not have any plans of getting married soon. However, one woman who has always been spotted with him is Andrea Giaccaglia, a Ghanaian-Italian model and the pair have been sighted together in public on a lot of occasions.

The CEO of Triple MG, Iyanya Mbuk is one of those few artistes who can beat his chest and boast that doesn’t have a baby mama, at least going by what we know. Obviously a lady’s man, Iyanya hit fame and fortune with the release of tracks like Kukere and Your Waist. His stage performance is dominated by gyration and a lot of wriggling of his waist to the delight of his female fans. In an interview with Hip TV a while ago, he had advised his colleagues to ‘Never let your baby mama go… she should be your wife.’ However, a while ago it was reported that the Kukere crooner and winner of MTN Project competition in 2008 was dating Freda Francis.

However, an ex-girlfriend of Iyanya’s has taken to so­cial media to claim that he sleeps around without protec­tion. The ex-girlfriend, Nkechi, despite Iyanaya unveil­ing Freda Francis as his new girl friend still claims that she is dating Iyanya. Meanwhile, he has been romanti­cally linked to Yvonne Nelson and Tonto Dikeh.

32year old Flavour hit the limelight after the release of his debut single, Ashawo, a remix of Osita Osadebe’s classic in the late 2000s. Among others, this hunk has a habit of uploading sexy pictures of himself on instagram and this has won him numerous female fans. And one thing you cant take from him is his attraction for beauty queens. Currently the exhibitionist has two children from two different beauty queens (Sandra Okagbue and Anna Banner). Meanwhile, there are rumours he is dat­ing Chidinma aka Miss Kedike after she featured in his song Ife, where they shared kiss in the video. However, Flavour, going by his antiques is obviously not ready to tie the knot anytime soon even as he heats up social media with his semi nudes.

Jude Abaga aka M.I is one of the most eligible bachelors in Nigeria’s music industry no doubt. The president of Chocolate City popularly known as Mr. Incredible a couple of years back was rumoured to be on the verge of tying the knot with his girlfriend, 2010 Miss Nigeria runner up, Erica Okundaye. Word even had it that he had travelled all the way to Edo State to see Erica’s parents

However, beyond that, little is known of his relation­ship with members of the opposite sex but rumours hint at a relationship with fellow Glo Ambassador and singer, Waje.

From Mushin to Mo Hits was the title of his debut album under the now defunct Mo Hits record label. From humble beginnings in one of Africa’s biggest ghettoes, Mushin, Wande Coal has risen to the top of his career. His delivery on Patoranking’s My Woman has only consolidated his hold on the industry and today, Oluwatobi Wande Ojosipe aka Wande Coal is the CEO of Black Diamond Entertainment. In a recent interview with a popular magazine, Wande Coal declared that he had no immediate plans of marrying his baby mama who has a seven-year old son for him. And if you’re a female fan hoping to hook up with him for good any time soon, forget it. The rapper has declared that marriage is not on his front burner!

Hear him: “The time for marriage is not ripe yet be­cause I need to really focus on my career now which is the major thing in my life. My career is my drive basically so marriage is totally out of it for now.”

Until the release of his monster hit, Double Wahala, self styled musical Taliban, Oritsefemi, was a barely known Ajegunle artiste who was living from hand to mouth. However, Double Wahala changed all that. But was it responsible for the subsequent break up with his lover, of many years, Blessing Bawa?

With fame come women and with wom­en come temptation. Could that be what precipitated their break up? Shortly after their break up, Oritsefemi was romantically linked to sexy singer, Adasounds, though Adasounds later declared that she could never date a guy like Oritsefemi. Mean­while, Oritsefemi has two daughters from two different women.

The Egberi Papa 1 (Enetimi Alfred Odom) has a daughter, Emmanuella, with his long time girlfriend, Barbara but he obviously has no plans to settle down any time soon. In 2015, in an interview he had declared: “Marriage comes with a lot of responsibilities which are beyond financial or material things. God has blessed me with everything a man needs to have a success­ful married life and you can bet that Em­manuella and Barbara will get the best of everything money can buy, but personally, I don’t feel ready for it.”

However, in 2015, and Barbra welcomed their second daughter named Grace into the world. Timaya and his girlfriend, Barbra already have a four-year-old daughter, Emma. Meanwhile, a woman named Shella B accused Timaya of rape in the U.S but he later came out to deny that whatever hap­pened between them was consensual.

If you’re a female fan of Terry G’s and you’ve been dreaming of hooking up with him for good then forget it! Rea­son, Terry G and his baby mama, Mimi Omoregbe welcomed their first child, Rex, on November 1, 2012, and since mid last year, the Free Madness singer has been talking about marriage and set­tling down.

In a recent chat with a popular news platform, Terry G had said: “It will happen very soon but it takes planning and much more. Ironically, I am facing a lot of pressure regarding marriage but it is not from either of our families. The pressure is from outsiders. I want to work hard and be stable. I want to work to the extent that I would not rely on music because I do music for fun. Everybody knows that she lives with me and I am already living like a married man.” -The Sun