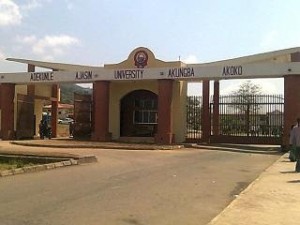 There was confusion in Akungba-Akoko in Ondo State at the weekend, following a protest by students of the Adekunle Ajasin University (AAUA).

It was learnt that the students were protesting poor condition of facilities at the University Medical Centre where a student who was hit by a motorcycle died.

Residents ran helter-skelter as guns boomed. Soldiers and policemen drafted in the community could not quell the protest because of the number of students involved.

During the melee, many public property were destroyed.

The Regent of Akungba-Akoko, Princess Toyin Omosowon’s pleas for calm were rebuffed.

Many people who had ceremonies in Akungba, Ikare-Akoko and other neighbouring towns were disappointed as the protest stalled all activities.

Travellers coming from Lagos, Ibadan, Abuja and other areas could not pass through Akungba-Akoko.

The university authority has announced the closure of the institution.

A statement by the Acting Registrar, Sunday Ayeerun, said: “This development followed the destruction of property within and outside the university premises by some students over the death of a student after an accident involving a commercial motorcycle outside the campus on Friday”.

“The ongoing examination is suspended and all students are to leave the campus and halls of residence immediately.”

The statement added that students would be informed on when to resume for the completion of their examination.

It noted that the management has set up a panel to investigate the protest. -The Nation