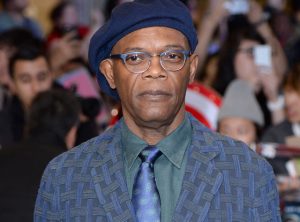 Earlier this weekend, a fan decided to go on Twitter and share their disappointment after running into the actor and not getting a photo.

“That moment when you meet one of your favorite actors & they are a COMPLETE D–K!!!!!!!!!” the radio DJ simply known as Fitz wrote on Twitter. “What an arrogant PUNK! Right @SamuelLJackson ????”

As it turns out, the actor saw the tweet and had something to say.

“I refused the photo politely @FollowFITZ then you spazzed out!” Samuel responded. “Learn to say Please & F–k you! Thanks for the Whitney Snitch!”

He continued, “I said thanks but no @FollowFITZ, you said Aww C’mon, I’m a big fan, me, sorry, you, I watch all your movies but not anymore! Now @FollowFitz, do you see Please anywhere in that exchange? You saw it your way, I see it mine. Stop whining, it’s over.”

Two days after the encounter occurred, Fitz took to Facebook where he explained why he posted the first tweet in the first place.

“I just had a big letdown of my life. There was no altercation. There was no situation,” he shared. “I just went on Twitter and I told Samuel L. Jackson, hey I couldn’t believe how you treated one of your fans.”

He added, “If you’re going to be told ‘F you’ on Twitter by anybody, it’s awesome if it’s done by Samuel L. Jackson.”

Ultimately, the DJ still has love for Samuel thanks to his unforgettable movie roles. And the actor himself appears to be ready to move on from the situation.

“You’re right @FollowFITZ, I watched,” Samuel wrote on Twitter. “There’s a lot of folks that share your experience w/ me & tons of others just the opposite! Still a Fan.”