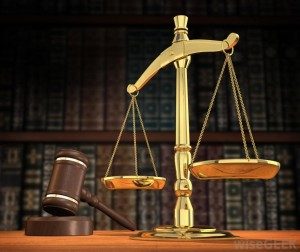 A Court in Port Harcourt, Rivers State has remanded for­mer Chairman of Asari- Toru Local Government Area, Ojukaye Flag Ama­chree, in prison custody, pending the ruling on the submission by his lawyer bordering on jurisdiction.

The suspect was alleged to be involved in the kill­ing of two youths who were members of another political party during the rerun election in the state on March 19, 2016.

He had been declared wanted by the Rivers State Police Command.

Chief Magistrate Israel Agbeso adjourned till to­day for ruling, after law­yer to Amachree, Ken At­suwete, asked the court to strike out the matter and return the accused person to the police, as the court lacked jurisdiction to han­dle the matter.

Meanwhile, Police Prosecutor, Inspector Tom Ledornam, insisted the court had the power to remand the accused, while other issues were sorted out at the Depart­ment of Public Prosecu­tion (DPP). He debunked the insinuations by Atsu­wete that the charge was intended to hold the ac­cused.

However, the accused person, Amachree, faced two-count charge of shooting and killing one Smart Soberekon in Bu­guma on April 11.

Speaking shortly af­ter court sitting, Atsu­wete frowned at the re­mand order and expressed optimism that the court would grant his prayers.

In a related develop­ment, the command said 37 persons arrested during the rerun elections in the state had been arraigned, debunking the rumours making the rounds that they had been released.

The command, in a statement issued yester­day, by the Police Public Relations Officer (PPRO), Ahmad Muhammad, a Deputy Superintendent of Police (DSP), on be­half of the Commissioner of Police, Musa Kimo, stated that the 37 sus­pects, including 35 males and two females, were arraigned before Magis­trate Courts four and six, Port Harcourt, on differ­ent days. It said further that consultations were in progress with relevant agencies so that the case could be diligently pros­ecuted.

Police noted: “The at­tention of Rivers State Police Command has been drawn to the ru­mours making the rounds that the suspects arrested during the rerun elections in Rivers State have been freed. -The Sun

China makes $832b from tourism

Federer says he’s not retiring but