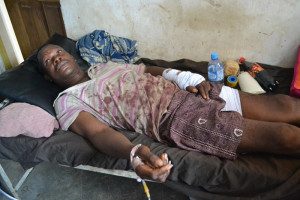 Five villages on the Ibadan-Iwo Road were attacked yesterday by gunmen. The villagers were robbed of their valuables.

The 20 yet-to-be-apprehended gunmen exchanged fire with the police before escaping into the bush.

Their first port of call was Ardis Farms, Lagun, a 200- hectare palm tree farm, where they shot a guard, Jimmy Aido, in the hand and thigh.

Thereafter, they reportedly headed to Offa, Adeoye, Lapeta and Adedokun villages where they dispossessed villagers of their valuables.

After the invasion, they “mounted” a road block during which they robbed some motorists.

Narrating their ordeal, the farm supervisor, Olanipekun Ogunkolade, said the bandits invaded the farm at 9pm on Tuesday.

He said they grabbed the first person on sight,  a woman, and forced her to lead them in.

According to Ogunkolade, the woman led them to the rooms and called them out, saying some people wanted to buy some items.

His words: “Wondering who could be around to buy goods at that odd hour, I left the food I was eating and came out.

“As soon as I came out, they seized me. They ordered me to lie down, which I did.

“A guard, Jimmy Aido, spotted them from a distance and informed the Chief Security Officer (CSO), who was not on the premises at the time.

“But they laid an ambush for him. On his return, they shot him in the hand and thigh.

“His wife started screaming. Her voice attracted vigilance group members from Lagun village. They shot into the air to scare them away.

“Policemen arrived at 3am and took Aido for treatment.”

The farm supervisor said the robbers ate their food and asked for cigarettes.

He added that they also asked for marijuana but that they told them that they did not smoke Indian hemp.

Ogunkolade said they were masked but that it was obvious they were Fulani herdsmen.

He added that some of  the bandits were armed with  AK 47 rifles.

After the attack, the farm supervisor said the bandits resurfaced on the Ibadan-Iwo Road where they robbed motorists, until the police got there.

Ogunkolade said they had a gun duel with the police but later fled into the bush.

Asked if there had been clashes with the herdsmen in the past, he  said there was none.

He said herdsmen usually brought their cattle to graze on the farm without conflict.

On his bed at the General Hospital, Iwo, Osun State, Aido could not talk. He only managed to nod his head.

The farm proprietor,  Dele Adigun said: “Their aim was to frighten us out of this place. But they won’t succeed.”

He put his loss at N300,000, saying his workers stayed away yesterday out of fear.

The farmer called on the government to strengthen security around farms and remote communities. -The Nation

Anenih is not dead, he is alive