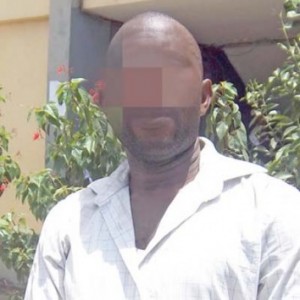 A 15-year-old girl, Joy, yesterday at the Lagos State Police command headquarters, Ikeja told a chilling story how she was defiled by her uncle.

Giving a graphic ac­count on how she was abused, Joy said “I was brutally defiled on Sun­day. I was sleeping when uncle Akpan Imeh started touching me. I woke up and tried to resist him, but he overpowered me. He used his palm to cover my mouth and forcefully tore my undies and had sex with me.

“He had done same last year. I was 14 years old then, his wife confronted him and he denied it, he lied that I forgot to lock the door before sleep­ing and unknown rapist cashed in and slept with me. I tried to explain to mummy that it was my uncle, but she pretended she was confused.

“I could not push the case further, because mummy started behaving as if I was trying to tarnish her husband’s name. well, I decided to go on with my life.

On Sunday, I was all alone in the house in com­pany with uncle as his wife travelled with his son. He came in the night and did it to me. I was beg­ging him to remember that I am his sister’s daughter, but, the more I struggled, the more the thing was entering. It was so painful and blood was gushing out of my private part.

‘After doing it, he start­ed begging that I must not tell his wife, I was pretend­ing to reason with him. He made another attempt, and I escaped from the house. I ran as far as my legs could carry me, till I met a man, who I explained every­thing that happened to me.

The man took me to a hotel and said I should sleep till the following morning. He promised to take me to the police sta­tion. I could not sleep, be­cause the more, I tried, the more the memory of what the man I call daddy did, was coming to my mind.

I am crying because I call him daddy. I started living with him when I was five. I am now 15, meaning that I have been living with him for 10 years. Even in the ho­tel room, the man who claimed he was helping me still tried to sleep with me, but I started shouting and he let me be.

It was my shout that at­tracted the staff who as­sisted me in escaping an­other rape. I now went to the police, who took me to the hospital and arrested my uncle.

The suspect, Akpan told Daily Sun that he was drunk when he committed the abominable act. I am finished; it is abomination in my community to com­mit incest. I slept with my sister’s daughter out of drunkenness.

It was not ordinary. One of my relations gave birth after a decade of looking for the fruit of the womb out of happiness, I drank excessively so, I did not have control of myself. It was after doing it that I realised what I did. If my home people hear what happened, I will be ostra­cized. my wife will kill me.” -The Sun

AGF to Saraki, others: Your trial in order