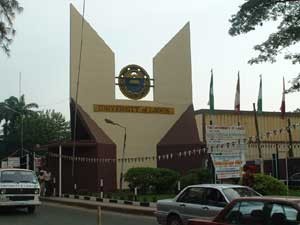 Students of the University of Lagos (UNILAG) yesterday chased out their lecturers from classrooms to protest scarcity of water and power outages in hostels.

The protest, which entered the second day yesterday, saw  students disrupt academic and administrative activities while policemen mounted surveillance from the main gate.

Yesterday afternoon, the protesting students barricaded the Akoka end of the main gate and prevented vehicular movement into and out of the campus while they screened those entering the university.

According to the students, the failure of the management to solve the lingering water and electricity situation, which they said had made life difficult on campus, prompted the protest.

The angry students marched round the campus, complained of a deteriorating environment, both at the hostels and lecture halls, while accusing management of preventing other water suppliers from bringing the commodity into the campus.

To ensure that the protest did not get out of hand, Lagos State Police Command, quickly mobilised policemen from Sabo, Denton, Surulere, Bariga and Orile divisions, in eight patrol vans and mounted surveillance at the Akoka end of the gate leading into the institution.

It was  gathered that the two main gates, students’ hostels and lectures rooms were shut by the students’ union officials who led the protest. Also affected in the day-two protest were commercial activities as banks, eateries, photocopying business centers, campus shuttles and the numerous shopping complexes whose operations were all crippled.

Lecturers confirmed to Daily Sun that lectures were disrupted while two students of Mass Communication and Philosophy said they were sent packing from the male hostel at about 10.30am by the students’ union officials, who urged them to join the protest as it was for the interest of all students on campus.

John Odedeji, a 200 level student of Faculty of Education and Kemi Dada of Science faculty decried the shortage of water and the erratic electricity supply on campus. Both vowed that the protest would continue until the management addresses the issues in contention.  A lecturer at Department of Political Science, Dr. Dele Ashiru said: “I was chased out of the lecture hall this morning (yesterday) by the students who were protesting over electricity and water.

Ashiru said: “This is the first time in the history of Nigerian university that students would chase out lecturers from the classroom.’’

A Professor at the Faculty of Education told Daily Sun that the protesting students did not disrupt any lecture because they had declared lecture free day in honour of a colleague who died two weeks ago, but, after the programme, the students stormed the faculty.

No management of the university was around to speak with the protesting students, who insisted that the Vice Chancellor, Professor Rahaman Bello, must address them and give them reasons to suspend the protest.

But a text message sent to students from the DSA read: “Students should go about their academic activities peacefully and ignore the call for protest by those who are hell bent on disrupting the academic calendar.’’

As at 6.40pm yesterday, the Senate of the institution was meeting to decide on whether to shut the university and send the students home for some weeks. -Daily Sun