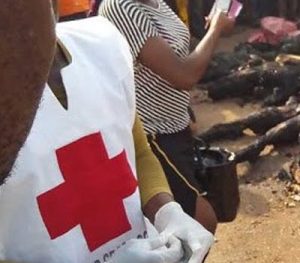 The Nigerian Army, yes­terday, said an Improvised Explosive Device (IED), planted by members of the Boko-Haram terrorist group killed one soldier and four others at Biu, in Borno State.

The incident happened yesterday at about 8.15am, near a military check point, after a tricycle, popularly known as “Keke NAPEP” stepped on the IED, said to have been planted by the side of Biu/Damboa road.

Four persons, among them a woman and her baby and two other males were said to have died on the spot, while three others includ­ing the deceased soldier sus­tained serious injuries and were rushed to the Biu Gen­eral Hospital.

However, the soldier died on the road before they got to the hospital.

A statement issued by the Acting Director Army Public Relations, Sani Usman, said the scene of the explosion has been cordoned off while personnel from the Explosive Ordinance Device (EOD), from Forward Operation Base (FOB) in Bura­tai, have since been mobilised to carry out further search of the area.

Usman, while commiserating with the families of the dead and those who sustained inju­ries, however, maintained that the explosion would not deter the military from carrying out its offensive to wipe out the Boko Haram terrorists wherev­er they might be hiding.

The army spokesman, who ap­pealed for more support and co­operation from members of the public to help the military suc­ceed in routing the remnants of the criminal elements ,

He Said: “Preliminary inves­tigations shows that the IED was buried long time ago unde­tected. It exploded when the tri­cycle erroneously stepped on it.

“This unfortunate develop­ment has brought to the fore, the need for more security con­sciousness and vigilance among all.” -The Sun

Fear of protests forces Trump to cancel London’s go to