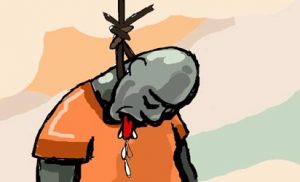 The lifeless body of an octogenarian, identified as Adegoke Oriola, was at the weekend discovered in Ondo town.

He reportedly hung himself with a rope fastened to a ceiling fan inside his bedroom at Ayeyemi Street.

It was learnt that residents learnt of the incident through one of his children, Taye, who is living with him.

She reportedly discovered her father’s body when she went to his room to check up on him.

Police sources said there was no suicide note.

Some spiritualists and traditional worshippers removed the body for burial.

Family sources said the 82-year-old may have committed suicide as a result of one of his daughter’s protracted illness on which he has spent all his money without cure.

The Divisional Police Officer (DPO) of Enuowa, Kunle Omisakin, said the report on the incident has been forwarded to the state police command, Akure. -Nigerianeye