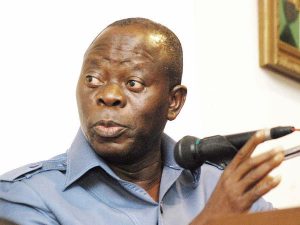 Governor of Edo state, Adams Oshiomhole has explained his reasons for supporting the federal government’s subsidy removal. He said, the policy “is the difficult pain Nigerians must undergo before reaping the gains”.

According to him, it does not make economic sense for the government to spend more than half its earnings just on fuel subsidy to the detriment of other development programmes.

Now a key member of the ruling All Progressives Congress, Mr. Oshiomhole said his position had changed because “the fundamentals and economic indices are different from what they were a few years ago”.

Speaking at a special thanksgiving service organised by Apostle Charles Osazuwa, Senior Pastor and founder of Rock of Ages Christian Assembly International (RACAi), Benin City, to round off a 7-day programme of the church on Sunday, Mr. Oshiomhole said the former Government of President Goodluck Jonathan spent as much as N1.2 trillion on fuel subsidy.

“l have listened to our chairman, Chief John Odigie-Oyegun, and he reminded us that the Hon. Minister of Petroleum, Dr. Ibe Kachikwu, has been under fire. I believe the fire will continue for some time. In spite of all that he is going through, the Minister recognized that we can’t be too busy to come to the church to ask God to help us to do the job. After all, the Bible says that unless the Lord builds the house, the labourer labours in vain,” the governor said according to a statement signed by his spokesperson, Peter Okhiria.

“The fire that he is going through, the end of it will translate to prosperity for our people. Leaders must see ahead of their followers, and when followers can’t see what a leader is seeing, with time and consistency, the followers will see the benefits of the decisions the leader has taken.

“As many of you might have known, this is not my first time in the struggle against pump price increase. I have fought it over and over again, and at a point, God used us to shut down the country just to make a point to the then government in power, but the truth is that the fundamentals have changed.

Under President Olusegun Obasanjo, we were talking of N20 billion for subsidy. And Obasanjo would ask me, Comrade, N20 billion can build XYZ road. I think the last one was about N40 to N45 billion a year for subsidy.

Mr. Oshiomhole continued, “government must make investments in research, in education, in technology. If we spend all our money or half of it on subsidy, we will drink petrol without vehicles for us to ride in. It simply doesn’t make sense anymore.

“The life of a nation is not different from the life of a human being. When you are traveling on a road which you believe will take you to a destination, 16 years down the road, it appears to be getting longer and longer, only a fool will continue to travel on that road. From the way it is, this is the time to stop, look back and see other options that are available. I believe that is what this Minister of Petroleum and President Muhammadu Buhari have done. I give my full support.”

He added, “When a nation and a people could not for good reason trust the leadership, even when the leadership asks you to make a sacrifice, the first question you ask is, if I make the sacrifice, what about you? Obviously, for a government that was sharing money for security services to party leaders, that government didn’t have the moral standing to call on Nigerians to make sacrifices.

Also speaking, the Minister of State for Petroleum, Ibe Kachukwu, insisted that the government of President Buhari is a government of hope, explaining that things could not continue the way they had been.- Premium Times