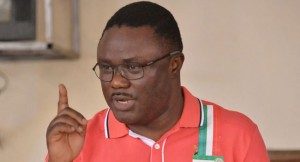 CROSS River Governor, Pro. Ben Ayade yesterday stunned the organised labour in the state when he an­nounced the payment of salaries for the month of May on the first day of the month.

A mild drama immediately ensued when the workers who were at the U. J. Esuene Stadium for the May Day celebration each began to receive salary payment alert from their various banks.

Unable to contain the excitement, shouts of ‘alert, alert, alert’ rent the stadium as the workers went into a frenzy and sang praises of the governor.

Before now, the governor had paid salaries between the 13th and 20th day of each month.

Ayade told the workers, who named him the Best La­bour Friendly Governor in Nigeria, that his administra­tion had a duty to give workers in the state a sense of dignity. “We must create opportunities for labour to feel a sense of dignity. If you are truly a Christian, you must know that as you care for your kids, you must care for labour. No infrastructure is more important than labour, that is why in all my programmes, I focus on people.”

Earlier, organised labour, through the Chairman of the Nigerian Labour Congress (NLC), John Ushie, had lent its support to the construction of the 260km superhigh­way as well as other projects aimed at repositioning the economy of the state. -The Sun