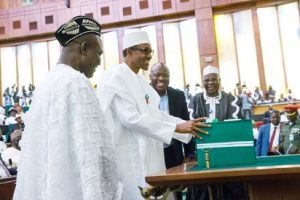 For the third time, the 2016 Appropriation Bill has been returned as President Muhammadu Buhari was said to have picked holes in the re-worked budget and returned it to the National Assembly for further legislative work.

It was reliably gathered that the re-worked budget was sent to the President at about 1.15 am, yesterday, but was returned to the National Assembly at about noon, yesterday. It was also gathered that principal officers and members of the review committee from both legislative chambers met, yesterday, at about 3.20pm till about 5.30pm in the Senate wing to reconsider the observations made by the President on the budget.

A source close to the committee confirmed that the budget was actually submitted to the President but that he refused to touch it due to some issues he was not comfortable with. He said: “The budget got to the State House at about 1.10 am and Mr. President went through it early this morning (yesterday) and still had some issues with some of the figures.

“I cannot tell you exactly what it was but I think the insertions made by the lawmakers were not significantly altered. “You know the lawmakers had moved some allocations for key projects that are dear to the President to other areas, especially to their constituency projects. “Of course, they have changed some but I believe Mr. President is not satisfied with the reconciliation they made. I think this is one of the reasons it was returned.”

He also disclosed that the President would assent to the budget today should the lawmakers make all the corrections and transmit the document to him tonight (last night). He said: “I can assure you, Mr. President is desirous to sign the budget because he is aware and has acknowledged that Nigerians are going through hardship. So, if the budget is cleaned up this night and sent to him, he will sign it as soon as possible. That I know very well.” Further probe into the matter revealed that the N500 million diversion of funds to constituency projects is “what is giving the president headache.”

A lawmaker, who is not a member of the review committee but a member of the standing committee on appropriation, revealed that the “President wants a situation where the insertions should be reduced to about N50 million before he will sign the budget.” The reviewed copy, which was sent yesterday morning did not cut substantially from the N500 million. At press time, the review committee meeting was still ongoing as the members struggled to ensure that all the observations of the President are put in order before presentation. -Nigerianeye