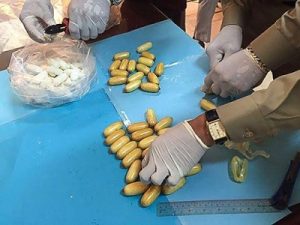 According to the National Authority for Combating Drugs, two Nigerian men were arrested at Phnom Penh International Airport on Monday, May 9 for smuggling 1.27 kilograms of cocaine inside their bodies.

The men identified as Okafor Ifeanyi Anthony and Adibe Paschal flew from Nigeria to Vietnam, via Qatar, and then to Cambodia, using Qatar Airways flight Q970.

“When the [authorities] detained them at the airport, he found some substances which they carried in their hands,” said In Song, an official at the Anti-Drug department at the Ministry of Interior. “They carried this substance to deceive us.”

“Police confiscated several bags of the mysterious brown powdered substance but it did not test positive for drugs.The drugs that they hid were in their stomach,” said Song.

Police extracted the drugs by ordering the Nigerians to eat laxatives and excrete them on Tuesday and Wednesday. Song said that the Nigerians were likely bound for Pattaya in Thailand. -Phnom Penh Post

100 migrants lacking in shipwreck off Libya

Murray out of Australian Open