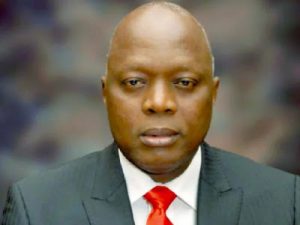 Dr. Pius Odubu, Edo State Deputy Governor on Sunday narrated how he narrowly escaped death in the hands of suspected assassins in Etsako West Local Government Area of the state.

Odubu, an aspirant under the All Progressives Congress for the September 10 governorship election, had last Saturday been reportedly attacked by some armed thugs during his visit to Auchi to meet with party delegates in the area.

The thugs were said to have claimed that they were mobilised with the sum of one million naira.

Odubu, who had reportedly been at loggerheads with Governor Adams Oshiomhole over his ambition, was denied access to the APC secretariat at Fugar, allegedly on the instruction of a deputy director of protocol at the Government House.

The situation was later said to have angered some delegates who forced the gate open to enable the deputy governor meet with them (delegates) outside.

He was said to have left for Auchi and was meeting with some delegates when the suspected thugs suddenly appeared and fired gunshots, leaving several persons injured, including a policeman and an operative of the Department of State Security.

A source who did not want to be mentioned had told our correspondent that although Odubu was not injured in the attack, the thugs claimed to have been mobilised with the sum of one million naira.‎

However, Odubu, who spoke through his campaign organisation, during a press briefing in Benin, said that he had to be shielded inside a hall to avoid “direct bullet contacts”.

“Surprisingly, at Auchi, the deputy governor and his team met with passionate, patriotic (and) huge number of delegates but no sooner had the meeting begun than the gunmen opened fire outside the secretariat on both security men and members of the deputy governor’s entourage and delegates. It was such a shocking and gory sight to behold,” he explained.

He noted that although the attack was “orchestrated directly at his person” and geared towards disrupting the aims of the campaign, seven persons sustained varying degrees of injury and were receiving treatment at the University of Benin Teaching hospital and another hospital in Auchi.

According to him, the victims include, a DSS operative, Patrick Amakiri‎; his escort police commander, Inspector Agge Felix; and a driver, Zibiri Yakubu.

Others are Ogbeso Nice, Inu Umoru, Osabuohien Igiebor, Matthew Ajayi‎ and another person whose identity could not be ascertained.

Speaking on behalf of the Odubu Campaign Organisation, a former Minority Whip in the House of Representatives, Mr. Samson Osagie, disclosed that preliminary investigation by the organisation had revealed three principal suspected masterminds of the attack, which he described as an act of cowardice “perpetrated by those who dread a free, fair and credible democratic contest” and an attempt to compel the deputy governor “quit the governorship race or be eliminated”.

Osagie also called on the national leadership of the APC to intervene in the happenings in the state.

“This, to us, is the height of naked display of cruelty, animosity, acrimony, intolerance, gross irresponsibility and man’s inhumanity to man,”‎ he added.

The leadership of the ‎state chapter of the APC, condemned the attack on the deputy governor, describing it as “absolute madness” which he said had become “endemic” in the party.

The state Publicity Secretary, Mr. Godwin Erhahon, who stated this, said, “I am not a member of any campaign organisation; I am not a supporter of any aspirant. But in a moment like this, where the blood of some of our members have been shed and then members of this (Odubu’s) organisation have also been traumatised, it is only fair and proper that the party identifies with the traumatised and join them in thanking God that nobody died in the process.

“Therefore, I am here to also condemn what happened yesterday at Auchi, on behalf of all the APC members and leaders who are not yet infested with the ongoing madness that has become endemic in the party. What happened yesterday was absolute madness. I think we should pray for them (perpetrators) so that sanity can come into them, otherwise, they will end up destroying themselves.” -Nigerianeye

Marriage will not make me put an end to my music...