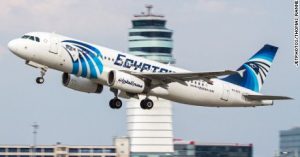 Debris from the missing EgyptAir flight has been found floating in the Mediterranean, Egyptian officials say.

Flight MS804 was en route from Paris to Cairo with 66 passengers and crew when it vanished early on Thursday.

Greek Defence Minister Panos Kammenos said a body part, two seats and at least one suitcase had been found.

The items were found slightly to the south of the area where the plane disappeared from radars on Thursday, Mr Kammenos said.

European Space Agency satellites spotted an oil slick in the area where the flight had vanished but the organisation said there was no guarantee it was from the missing plane.

Egyptian President Abdel Fattah al-Sisi has expressed his “utmost sadness and regret” at the crash.

Greek, Egyptian, French and UK military units have been taking part in a search operation near Greece’s Karpathos island.

Greece said radar showed the Airbus A320 had made two sharp turns and dropped more than 25,000ft (7,620m) before plunging into the sea.

Egypt says the plane was more likely to have been brought down by a terrorist act than a technical fault.

However, there has been “absolutely no indication” so far as to why the plane came down, French Foreign Minister Jean-Marc Ayrault said on Friday morning.

Three investigators from the French air accident investigation bureau, along with a technical adviser from Airbus, have joined the Egyptian inquiry.

In France, the focus is on whether a possible breach of security happened at Paris Charles de Gaulle airport.

After last November’s Paris attacks, some airport staff had their security clearance revoked over fears of links to Islamic extremists.

Eric Moutet, a lawyer for some of those employees, told the BBC that there had been attempts by Islamists to recruit airport staff.

“That is clear,” he said. “There are people who are being radicalised in some of the trade unions, etc. The authorities have their work cut out with this problem.”

In October, an Airbus A321 operated by Russia’s Metrojet blew up over Egypt’s Sinai Peninsula, with all 224 people on board killed.

Sinai Province, a local affiliate of the Islamic State jihadist group, said it had smuggled a bomb on board. -BBC