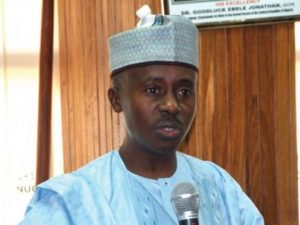 A High Court of the Federal Capital Territory (FCT) in Lugbe, Abuja, was told on Wednesday by an Eyewitness how a former House of Representatives member, Farouk Lawan, was caught on video camera accepting bribe from businessman, Femi Otedola.

A prosecution witness, David Igbodo said a sting operation carried out by detectives exposed Lawan, the then Chairman of the House of Representatives Ad-hoc Committee on Fuel Subsidy, accepting bribe from Otedola.

Lawan is being prosecuted by the Independent Corrupt Practices and other related offences Commission (ICPC) on bribery charges.

He was accused of accepting the bribe in exchange for the removal of Otedola’s company’s name, Zenon Petroleum and Gas Limited from the list of firms indicted by the House committee for allegedly abusing the fuel subsidy regime in 2012.

Igbodo, a Commissioner of Police, Legal Services and Investigating Police Officer in the office of Inspector General of Police, Special Investigation Unit, said Lawan was caught on a video clip collecting $500,000 from Otedola.

The witness, who was led in evidence by the lead prosecuting counsel, Chief Adegboyega Awomolo (SAN), said the video recorder was set up as part of a sting operation by the Department of State Security (DSS)

The witness told the ‎trial judge, Justice Angela Otaluka, that the video clip was recorded at Otedola’s residence on April 24, 2012.

Igbodo said after receiving the bribe, Lawan went ahead to remove Zenon Petroleum and Gas Limited from the list of firms indicted by the  House committee. -The Nation