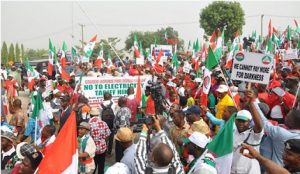 The federal government has threatened to arrest labour union officials who try to coerce workers to participate in the planned industrial action slated for today.

Recalls that the National Industrial Court (NIC) yesterday ordered that the labour unions should not go on strike.

Secretary to the Government of the Federation, David Babachir Lawal stated this Tuesday night in Abuja following an unproductive parley it held with the Ayuba Waba-led faction of the Nigerian Labour Congress, NLC. The faction had vowed to go ahead with its planned strike today. “We had full cooperation with the Trade Union Congress TUC and they said they are not going on strike.

For them, it is a complete return to work tomorrow.

It is not the same with the NLC however. They have two factions. One agreed completely with the position of the TUC. A faction of the NLC however decided that unless government decides to look at the issue of the highest ceiling on the cost of PMS they would have no further participation in the process and since we only received a notice from them on Saturday, it is government’s position that it is not humanly possible to respond to their demands within the time-frame given.

Government has informed them that it cannot respond to their demands as presented. “Aside from the NLC, a number of individual affiliate unions had long indicated that they would not participate in the strike.

Engineer Babachir David Lawal
Secretary to the Government of the Federation