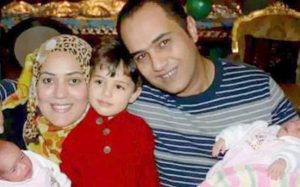 EgyptAir flight MS804 with more than 66 people on board crashed during a flight from Paris to Cairo.

Among the dead was a husband and wife who sold everything to pay for life saving cancer treatment and now leave behind their three young children as orphans.

According to the Egyptian newspaper Marawy, 31-year-old Ahmed Ashery sold his family’s flat and car to raise money so his wife Reham could undergo cancer surgery in France.

The couple left their young son and two daughters with his mother and spent a month in Paris, where Mrs Ashery had surgery and seemed on the path to a full recovery. They boarded Flight 804 on Wednesday night excited to be reunited with their small children but the plane never made it back to Cairo.

“Ahmed sold everything to save his wife and ease her grief,” said Mohamed al-Shenawi, a family friend. “I advised him to accept the command of God and look for treatment in Egypt but he insisted on travelling. They spent a month and then they returned onboard the plane which didn’t arrive and now will never arrive.”

“He travelled to Paris with his wife, leaving his three children with his mother. They spent a month and then they retured onboard the plane which didnt arrive and now will never arrive.”