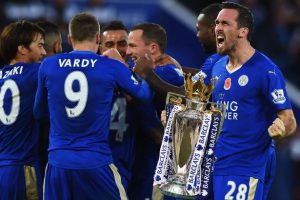 Finally, the seemingly impossible feat has just happened, the fairy tale story is completed. Leicester City have just won the the 2015/2016 English Premier League with 2 games remaining, courtesy of an Eden Hazard equalizer that ensured Chelsea played a 2-2 draw with Tottenham Hotspurs, which means Leicester’s closest Spurs will not be able to catch Leicester City.

Claudio Ranieri’s men could have been crowned on Sunday when they faced Manchester United at Old Trafford, but saw their celebrations delayed after they drew 1-1 with Louis van Gaal’s men.

However, the Foxes are now Premier League champions after Monday night’s 2-2 scoreline at Stamford Bridge, having started the 2015-16 as one of the bookmakers’ favourites for relegation with 5,000-1 title odds.

After narrowly avoiding relegation last season with a run of seven wins from their remaining nine games, Leicester continued that form into the new season under Claudio Ranieri with just three defeats all season.

Arsenal, Chelsea, Manchester City and Manchester United, considered the most likely title contenders, all suffered inconsistent form to leave Leicester and Tottenham to fight for the title in recent weeks.

The Foxes have not been positioned lower than second since October and have held on to first place consistently since January, holding off the challenge of Spurs to clinch a first ever top-flight crown.