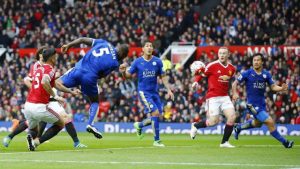 Leicester City were unable to clinch the 2015-16 Premier League title on Sunday after they drew 1-1 with Manchester United, although they could be crowned champions on Monday.

Table-toppers Leicester had to beat United at Old Trafford to secure glory but were denied by Louis van Gaal’s men, to postpone their capping of a remarkable campaign.

However, should second-placed Tottenham Hotspur fail to win against Chelsea at Stamford Bridge on Monday night, Claudio Ranieri’s Foxes will seal the title.

Leicester, who battled relegation last campaign and began the term with odds of 5000-1 to win the title, were without the suspended Jamie Vardy for their meeting with United, who are chasing a top-four finish.

United took the lead in the eighth minute as an Antonio Valencia cross found Anthony Martial at the back post, and the France striker shot low past goalkeeper Kasper Schmeichel.

Leicester hit back on 17 minutes with Wes Morgan heading in from close range following a fabulous delivery by Danny Drinkwater from a free kick.

The visitors had appeals for a penalty waved away in the first half when Riyad Mahrez collided with Marcos Rojo.

Late on, Danny Drinkwater received a second yellow card for pulling back United’s Memphis Depay, with Leicester unable to find the second goal that would have wrapped up their success.