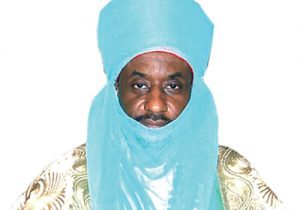 EMIR of Kano and for­mer governor of the Central Bank of Nigeria (CBN), Sanusi Muham­mad II, has revealed that former President Goodluck Jon­athan threatened him over an alarm he raised about missing $20 billion earned from oil sales.

Sanusi also declared that ex-minister of Petro­leum, Diezani Alison-Ma­dueke was so powerful during the Jonathan ad­ministration that anyone who ever confronted her had problems.

Speaking on Forbes Africa TV programme, My Worst day with Peace Hyde,” Emir Sanusi said after the letter he wrote to Jonathan leaked, he was invited by the presi­dent and threatened.

He said since it was only himself and Jona­than that were at the meeting when the threat was issued, he rushed down to the office of the president’s principal sec­retary to report the mat­ter in order to have some­body who could speak for him if anything hap­pened.

“I went straight to the office of his principal sec­retary and I met him with a gentleman from Kano, who was foreign minister Ambassador Aminu Ali. I said to them, ‘gentlemen, I’m coming to you be­cause I just had a meeting with the president and there were no witnesses, and the president threat­ened me.

“I repeated what hap­pened and told them I was going to tell people close to me, if anything happens to me, it is the president.”

On what transpired, he said: “The presi­dent called me and said I should see him at 3:00pm. I turned up at 3:00pm and the entire place had been swept. There was no one apart from security services. I got to his office and it was just him and me. It was as if everybody had been asked to go.

“And so, he said to me, he’s calling me because he is surprised that the letter I wrote to him got to (for­mer President Olusegun) Obasanjo. I said I’m sur­prised too.

“He said he’s convinced that the letter went from the Central Bank to Obasanjo and I had 24 hours to find who leaked the letter or sack some­body; the director who prepared the letter or my secretary and if I did not sack them, that was proof that I leaked the letter and, therefore, I should resign. I said to him that I’m surprised that I am being asked to resign for raising an alarm over missing funds and the minister in charge of the portfolio is not being asked to resign. From then, I knew I had signed my equivalent for death warrant. But, I said I was not resigning. He got very angry and said ‘whether you like it or not, you’re going to leave that of­fice, I cannot continue to work with you, either you or I will leave govern­ment.’”

He revealed that there­after, Senator Ben Bruce warned him to be care­ful over the letter or he would end up in jail.

“I remember Ben Mur­ray Bruce, who is now a senator coming to me to say that he had it on good authority that if I went to the Senate with my documents, I would be removed, investigated and imprisoned. Then, I asked, why would I be imprisoned? and he said, ‘you know, you’ve worked in government.’ I have worked in government, if people really want to find something on you, in the Central Bank, five years, they would come and look, they would find something. I was like they would find it if I have done it. I mean, they can plant something, but, if I haven’t done it, maybe somebody under me had done something that I wasn’t aware of. But, in all my years at the Central Bank, to the best of my knowledge, I had done nothing that should put me in prison. How­ever, I said to him, ‘tell the president, from me; that if the punishment for going to the Senate is prison, he doesn’t need to go through all of that, just ask him to tell me what prison he wants me to go to and for how many years, I’d drive myself there.’”

The emir also revealed that he was shocked that the letter he wrote to Jonathan leaked and he never knew how until former governor of Riv­ers State and now Minis­ter of Transportation, Mr. Chibuike Amaechi, said he leaked it.

I think a few weeks ago, Amaechi announced to the world that he was the one who obtained a copy of the letter and leaked it. I don’t know where he got it, he didn’t say where he got it.”

Amaechi confirmed leaking the letter “be­cause of the level of cor­ruption in government” then. On the controversy over the missing money, Sanusi said he wrote to Jonathan when the CBN discovered a $49 billion revenue gap. According to him, he had warned that the country was go­ing to have problem if nothing was done. The emir said he was not sur­prised that the Jonathan administration did not do anything to Alison-Mad­ueke who was in charge of petroleum where the money was missing as “taking on NNPC was taking on the most pow­erful minister in Jona­than’s government, and nobody who had touched Diezani survived.” -The Sun

UUTH resident doctors: We can’t work without been paid