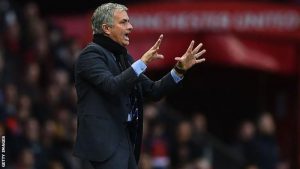 Manchester United are set to appoint Jose Mourinho as their new manager.

It is believed a deal with the 53-year-old Portuguese was agreed in principle before United’s FA Cup final win against Crystal Palace on Saturday.

With United failing to qualify for the Champions League under Louis van Gaal, the Old Trafford hierarchy is thought to have decided a change is required.

Mourinho has been out of work since he was sacked by Chelsea in December.

The club plan to announce his arrival early next week after telling Van Gaal, 64, his reign has come to an end.

In the post-match news conference following United’s FA Cup win, the Dutchman said: “I show you the cup and I don’t discuss it [my future] with my friends of the media, who already sacked me for six months. Which manager can do what I have done?”

When pressed on whether he will be at Old Trafford as manager of United next season, he replied: “I hope to see you. I don’t want to talk about about leaving this club.” -BBC

INEC warns in opposition to marketing campaign beneath guise of voter...