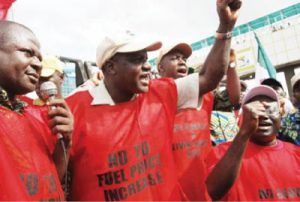 Organised Labour, made up of the Nigeria Labour Congress (NLC) and the Trade Union Congress of Nigeria (TUC) and their civil society allies has given the Federal Government till 12 midnight of Tuesday, 17th May, to revert to the old pump price of petrol or face a nationwide shut down if the economy.

In a joint communique signed by the President of NLC, Comrade Ayuba Wabba and his TUC counterpart, Bobboi Kaigama, they asked Nigerians to stockpile enough food item to last them a while for the prosecution of the current struggle against neo-liberal agenda in Nigeria.

They alleged that those they termed as neo-liberal forces have taken over the government and are determined to make the government collapse even before the four tenure.

If the government fails to accede to the demands of the unions, the NLC, TUC and their civil society allies resolve to commence the following actions with effect from Wednesday, May 18, 2016;
· Mobilize to the streets across the country, ordinary and helpless Nigerians to whom they owe the duty of protection;

· Shut down all Banks, Sea and Airports, Government and private offices as well as Markets.

· Fight/resist the machinations and cruelties of the neo-liberal forces in the government as part of the process of saving the government from itself and the generality of Nigerians from slavery.

Nigerians were advised to stock sufficient food items that will last for a while for the prosecution of the ” current struggle against neo-liberal agenda in Nigeria”.

He said the singular act of “mindless pump price increase is a betrayal of trust on the part of the government.

He recalled that the Minister of State for Petroleum, Ibe Kachukwu had told the nation that subsidy has been removed for petrol through his ingenuity and that Nigeria was saving $1 billion from the process.

“Organized Labour wondered what has informed government’s sudden and dangerous policy summersault and its desperate attempt to convince the public that Labour was part of the decision that led to this price increase;

“In view of the fact that the board of the Petroleum Products Pricing Regulatory Agency (PPPRA), which is statutorily vested with powers to recommend prices, has not been reconstituted, the price variation announced by any officer of the agency or outside the agency is not only ultra vires and illegal, it is a criminal imposition on the citizenry;

“The price hike from N86:50 to N145, representing 67.63% increase, is the height of insensitivity and impunity as there was no previous consultation with stake holders, especially the organized labour, or any justification for this reckless decision other than the fact that government believes it is accountable to no one”.

The NLC President faulted the statement of the Minister that marketers will have to source their dollars from the secondary market, pointing out that the attendant pressure on the dollar will lead to unimaginable rise in the prices of commodities and other services thus creating further hardship for the people.

“In view of the fact that in the past five years, there has been no increase in salaries or wages or pensions in the face of devaluations, spiralling inflation and other vagaries of the economy, this product price increase is unrealistic, unaffordable, unacceptable and is thus rejected;

“Government is unable to justify this price increase other than the puerile explanation that marketers need to recover their costs, without a thought for the aggregate or larger national interest including the need for local refining and creation of jobs;

“The government has remained incalcitrant in spite of a subsisting court injunction on the issue of the criminal increase in electricity tariff even in the face of ever-worsening power supply situation;
“From the foregoing, it is evident that the neo-liberal forces in the government have taken over the government and we should expect more inhumane policies which will further degrade the living standard of the average Nigerian. The punitive electricity tariff and PMS product prices may just be teasers;

“The implications are costly and far-reaching, with the first and most significant being that we have become dependent on massive importation of refined products to meet our domestic needs in contra-distinction to other OPEC members.

“Whereas most OPEC members significantly meet their domestic needs through domestic refining by an average of 80 per cent, Nigeria on the contrary, at the pace it is going, will continue to rely on about 90 percent of imported refined products in the foreseeable future;

“And because we are dependent on importation, the end-user price will always be influenced or determined by external factors such as the cost of refining abroad, transportation and others denominated in the dollar.

“As the Naira continues to depreciate against the dollar, so will the woes of consumers in Nigeria continue to increase, a situation the Marketers in classic greed will exploit to their advantage;
“Taking into account the utilitarian value of petroleum products in Nigeria, all sectors are going to be negatively affected by this mindless price increase as virtually all the stakeholders are agreed that the most significant contributor to the astronomical cost of doing business in Nigeria is the cost of energy.

“NLC, TUC and other civil society allies are not unaware of the positions taken by the Unions in the oil and Gas Industry. A process of engagement will be put in place in order to ensure the success of the struggle to protect the overall interest of the Nigerian people.

“In consideration of all of the above, we urge government to revert to the old price regime in order to reduce the suffering of the people and to consider this singular act of mindless pump price increase as a betrayal of trust;

“Revert to the pre-45 percent electricity tariff increase, make meters available to consumers and stop estimated billing and reconstitute the boards of PPPRA and NNPC without further delay and give them their statutory right to function alongside DPR in order to deepen the process of consultation, checks and balances in the downstream sector of the petroleum industry;

“Government must Intensify the prosecution of all those involved in subsidy scams with a view to recovery and sanctioning of the culpable; put in place enhanced local refining capacity within a specified period in place of endless importation as an enduring solution to the perennial problem of scarcity;

“They must reverse the entire deregulation and privatization process which foists on the nation, private individuals as drivers of the economy in contravention of the constitutional provision that says government shall be the driver of the economy and engage the organised labour in the process of negotiation on key policy issues;

“Government must wean itself from the overbearing influence of the neo-liberal elements in its fold who have not only staged a coup but are determined to make this government collapse even before the end of its four-year tenure;

“The President must uphold its electioneering promises to Nigerians instead of subjecting them to the vagaries of slavish policies such as full devaluation of the naira and total removal of subsidy as enunciated by the IMF and its agents in the system.”

Nigeria is a free-press state – Amosun