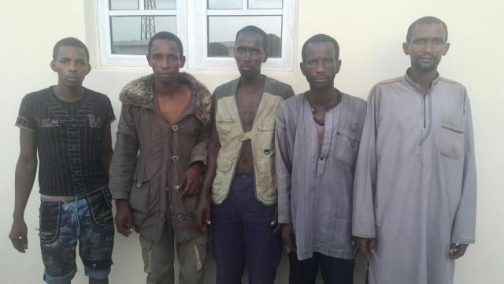 The Police Force Head­quarters in Abuja on Wednesday released the photographs of some of the arrested herdsmen who attacked Nimbo community in Enugu State.

The attackers compris­ing a five-member-gang were arrested by op­eratives of the Inspector General of Police (IGP) Intelligence Response Team (IRT).

The suspects were found with one Gionee L88 mo­bile phone with memory card containing video recording of the massacre in the community.

The police in a state­ment said the suspects were arrested after a cred­ible and technical intel­ligence by the IGP special squad.

The statement signed by the Force Public Relations Officer, Bisi Kolawole, while reiterating the determination to rid the country of crimes and all forms of criminality, also announced the arrest of another three-man-gang who specialiSes in bank robbery and kidnapping.

The suspects, Gogo Dan­iel Ume, Ikado Michael and Ifeanyi Kalu, were said to have been terrorising residents of Rivers, Imo and Enugu states.

The suspects arrested on May 5, were in possession of arms, ammunition, dy­namites and rifle servicing tools.

Kolawole stated that the police, in continuation of its IRT anti-kidnapping operations in Kaduna State, also arrested three suspected kidnappers believed to have been ter­rorising residents of the state. 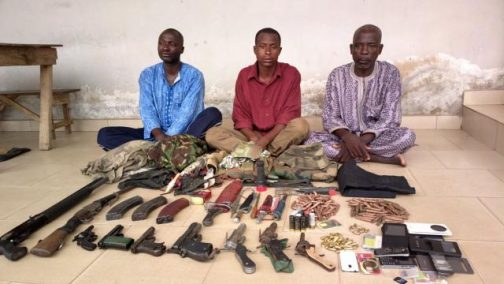 The suspects, Babangida Ibrahim, Idris Abubakar and Idris Mai Anguwa, were found with different calibre of weapons. -The Sun

Buhari: Nigeria’s drawback extra of course of than construction