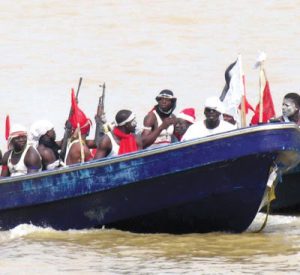 Fears that power supply may get worse were rife yesterday after Wednesday’s bombing of a Chevron Nigeria Limited (CNL) major valve platform around Escravos in Warri SouthWest Local Government Area of Delta State causing a shutout of about 100 milion standard cubic feet of gas equivalent to about 500MW of Average Power.

A militant group, the Niger Delta Avengers (NDA), has claimed responsibility for the sabotage of the crude oil and gas production facility. The attack is coming when work is being rounded off on the bombed Forcados platform.

The group has said it carried out an attack on a Shell oil pipeline in February which shut down the 250,000 barrel-a-day Forcados export terminal.

In a statement, Chevron Nigeria Limited, operator of a joint venture with the Nigerian National Petroleum Corporation (NNPC), said an attack took place at about 11.15 pm (2215 GMT) on Wednesday.

“Okan offshore facility in the Western Niger Delta region was breached by unknown persons,” said Chevron in the statement. “The facility is currently shut-in and we are assessing the situation, and have deployed resources to respond to a resulting spill.”

There were no immediate details of any casualties. The company could not be reached for further comments.

On Wednesday’s bombing, a source said: “Militants in the Niger Delta region have regrouped.

“Security personnel in the region are the main targets because these militants have cravings for their arms. They kill security agents and collect their arms and ammunition. They are now stockpiling them, possibly for major onslaughts.”

“The recent attack on naval ratings was the most brutal. Something must be done fast because the region is fast degenerating into a war zone,” he said.

In a statement by its spokesman,‘Col’. Madoch Agbinibo, NDA threatened that the Federal Government’s recent deployment of soldiers in the oil-rich region would not deter it from crippling the nation’s economy.

“The high command of the Niger Delta Avengers wants to use this medium to thank strike team 6 for successfully blowing up of the Chevron Valve Platform. And we are ready to protect the Niger Delta people.

”This is what we promised the Nigeria Government that since they refused to listen to us, we are going to zero the economy of the country.

“We want to pass this message to all international oil companies operating in the Niger Delta, that the Nigeria military can’t protect their facilities. They should talk to the Federal Government to meet our demands else more mishaps will befall their installations”, the statement said.

An oil industry expert described the attack as a major setback for oil production and gas supply, saying the facility is among the most significant platforms operated by Chevron Nigeria Limited (CNL).

A source said the bombing led to a massive leak. The nation’s crude oil output and gas supply to power generation companies would be greatly impacted because the subsequent repair would demand a shut-in for as long as the problem takes to fix.

The source added that the platform is one of Chevron’s most strategic facilities, connecting to/from other platforms, including the company’s BOP and its tank farm.

It was also gathered that damage had reduced gas production to 100 million cubic feet, meaning that what goes to power generation companies and other consumers has been reduced.

Nigerian Navy Information Director Commodore Chris Ezekobe confirmed that the facility which is located at about four nautical miles off Escravos Bar, was blown on Wednesday.

He said he was unaware that any group had claimed responsibility but added that there were no causalities.

He said: “It is an offshore facility located four nautical miles off Escravos Bar. Crude oil from offshore is collected there. The facility’s ability to pump crude oil and gas to the main Chevron facility at Escravos has been degraded.

“No one has claimed responsibility for the explosion that occurred on Wednesday and no casualty was reported.”

Navy Commodore Ezekobe added: “Like they blew up Chevron terminal in 2009. It happened about 40 nautical miles Escravos. Production has been cut short both in gas and crude oil. Gas production has reduced to 100 million cubic feet. We don’t know who is responsible. DNA can only be speculative. “

Gas supply to power generating stations was severely reduced, thereby causing a sharp drop in electricity supply nationwide, following the bombing earlier in the year of the Forcados platform, which belongs to the Shell Producing Development Company (SPDC).

Although the full import of the Escravos bombing has not been determined, Vice President Yemi Osibajo said after the damage of Shell’s Forcados export terminal pipeline and the vandalism of the Lagos Escravos pipeline in February that the sabotage resulted in the shortage of 3,132 megawatts (MW).

Speaking during the ninth international conference of Nigeria Association of Energy Economics/International Association of Energy Economists (NAEE/IAEE) in Abuja, he said: “the incident on the pipelines has cut gas supply to power plants in the Western Axis, such as Egbin, Omotosho 1, Olorinsogo 1, Ughelli, Omotosho NIPP and Olorunsogo NIPP leading to 3,132MW being constrained.”

Inadequate gas supply, blamed on vandalism of gas pipelines, has been the bane of the power sector. Power generation in the last one year has been so unstable, ranging from a high of 5,000Megawatts a few months ago to a low of about 1,455Megawatts.

Generation levels of 2400megawatts and about 4,1050 have been variously recorded, but were never sustained due to unstable gas supply to the power generating plants.

The Vice President travelled to Forcados to ginger up work on the platform. President Muhammadu Buhari declared that breaking of pipelines and oil platforms will henceforth be treated as economic sabotage.

Speaking to Nigerians resident in China during his state visit, the President said: “The government is still being dared, but those who are sensible should have learnt a lesson. Those who are mad, let them continue in their madness

”I am aware that in the last two weeks, the national grid collapsed a number of times. I hope this message will reach the vandals and saboteurs who are blowing up pipelines and installations. We will deal with them the way we dealt with Boko Haram.”

Mrs Adeosun debunked the claim that the Federal Government has no economic team. According to her, what is important is to work rather than talking. She said the team is headed by Vice President Yemi Osinbajo with Ministers of Finance, Budget and Planning, Trade and Investment, Information, the Director-General of the Debt Management Office (DMO) as members. -The Nation