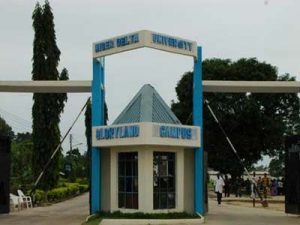 Students from the Bayelsa State-owned Niger Delta University (NDU), Saturday, protested the indefinite closure of the university following the inability of the state Governor, Mr. Seriake Dickson to pay backlog of workers’ salaries.

The students under the aegis of the Niger Delta Visionary Movement (NDVM) also knocked other students’ bodies such as the Student Union Government of Niger Delta University (SUG-NDU), National Union of Bayelsa state students (NUBSS) and the National union of Izon-Ebe Students (NUIS) describing them as puppets.

The aggrieved students in a statement signed by the Spokesman, NDVM, Mr. Wisdom Adike, threatened to march naked with their books and block the entrance to Government House if after a week the stakeholders failed to settle their rift and open the university.

The Academic Staff Union of Universities (ASUU) has been on strike following the inability of Dickson to pay its members.

Adike said: “We wish to bring to the notice of the general public, that the strike embarked upon by the Academic Staff Union of Universities (ASUU) Niger Delta University Chapter on 26th April 2016, over nonpayment of salaries, have led to the shutdown of the institution for over 3 weeks now, which have continued to give parents and students great concern.

“Niger Delta University being the only state owned university is a legacy established by the late Chief DSP Alamieyeseigha who was recently laid to rest. The institution has not only helped in meeting the manpower needs of the state but the entire Niger Delta region and beyond.

“However, we wish to express our displeasure over the lingering strike and government’s attitude towards resolving the situation noting that the strike has increased hardship, made students to sit idle at home and lose focus on their academic pursuit, as well prolonged their academic programmes, thereby causing youth restiveness and society unrest”.

He wondered why all the students’ bodies kept sealed lips and toothless over the plights of students and appealed to the Ijaw Youths Council (IYC) Worldwide to intervene and ensure immediate reopening of the school.

He said: “We also call on the Ijaw Youths Council (IYC) to stand up, break their silence and defend the legacy of the ijaw nation by ensuring the immediate reopening of Niger Delta University. This is because now is the time to protect our common heritage.

“We are also using this medium to call on President Muhammadu Buhari to intervene in his magnanimity and benevolence in salvaging the state from the current economic crunch and hardship as parents and guardians especially in the local governments of the state have not received salaries for over 12 months, despite the release of bail out funds by the federal government.

“Finally, we want to urged all students to embrace peace and calmness as all available non violence means will be utilized to end this strike and return back to school.

“We also want to state, that if the bayelsa state government, IYC, and other stakeholders fail to give a positive response within one week, then we shall march naked with our books and foams across the state and beyond, we shall occupy creek haven and the east-west road”. -nigerianeye