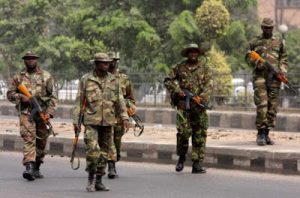 The suspects were said to have been arrested at about 1:40am on Saturday, in Oporaza community, Warri South-West Local Government Area of Delta State, following a cordon and search operation conducted in the community.

Several oil installations in the region have been vandalised by militants suspected to be members of the Niger Delta Avengers, threatening the production and supply of oil and gas in the country.

‎The Commander of the 4 Brigade, Brigadier-General Farouk Yahaya, who paraded the suspects on Sunday in Benin, the Edo State capital, explained that there had been several cases of sabotage by suspected militants and vandals in Delta State since January 1, 2016‎, as well as further warnings and threats “to shut down all operations” in the sector.

He, however, noted that‎ several items were recovered from the arrested suspects.

They include 28 detonator cords (also known Detonator 33), one pistol, two empty pistol magazines, 196 rounds of 7.62 special ammunition, one round of nine-millimetre ‎ammunition, a live cartridge and five daggers.

Others are seven wraps of substances suspected to be Indian hemp, five speedboat throttle cables, six pairs of hand gloves‎, N23,000 cash and a cheque book.

He said that although investigation would reveal the true identity of the suspects, recent explosions carried out by the Niger Delta Avengers suggested that the arrested suspects may be connected to the group.

He added, “Within the period under review, you can see that the Niger Delta Avengers have claimed virtually all acts of criminal activities against oil and gas and they continue threatening a shutdown of the whole sector. So, most likely, they (suspects) will be the people, who else would they be?