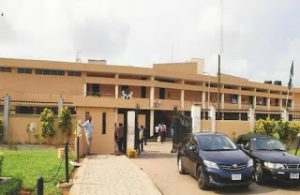 Edo House of Assembly speaker, Mr Victor Edoro, was impeached by 16 of the 24 members of the assembly today, May 3rd 2016.

In his place, a woman, Mrs Elizabeth Ativie was elected by the lawmakers as the new Speaker. The impeachment followed a motion moved by the Majority Leader, Mr Folly Ogedemgbe (APC-Owan- East) and seconded by Mr Patrick Illuobe (PDP – Esan-North East).

“This is an impeachment notice signed by 16 members that the speaker Victor Edoroh and his deputy, are hereby impeached,’’ Ogedemgbe said during the house sitting.

According to reports, shortly after moving the motion, Ogedemgbe nominated Illuobe to preside over the election, who thereafter called for nomination for a new speaker and deputy. Ativie’s name was submitted as speaker by Mr Victor Assen (APC-Owan-East), while Mr Justin Okonobo ( APC-Igueben) was nominated as deputy speaker by Henry Okhuobo (APC-Orhionmwon).

The two were subsequently approved to lead the House by the lawmakers.

A mild drama, however, ensued immediately after the new speaker took her seat, when the assembly’s chamber was invaded by some suspected thugs.

The situation made security operatives to immediately take over control of the assembly’s premises, as staff scampered for safety. -Nigerianeye

Ayade pays workers May salary on May 1st