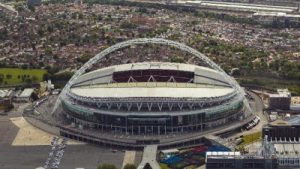 Tottenham have reached a deal to play their Champions League home games at Wembley next season.

The Premier League club also has the option to play all home league and cup matches, as well as any European games, at the national stadium during the 2017-18 campaign.

Spurs are having a new £400m stadium built next to their existing White Hart Lane ground.

The development is due to be completed in time for the 2018-19 season.

“Our season ticket waiting list is over 50,000 so this now also offers us a great opportunity to provide more of our supporters with a chance to see the team play live during our Champions League campaign,” said chairman Daniel Levy.

“Importantly, as we know it was our fans’ preference, it means that we can play our home matches in London during our season away.”

Tottenham’s third-place finish in the Premier League qualified them for the group stages of next season’s Champions League, which means they will play at least three home matches in the competition.

Fuel scarcity: Oil marketers stop importation due to $1b debt