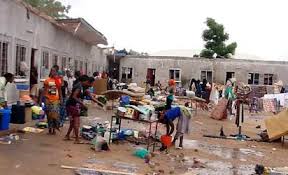 Rainstorm, at the weekend, in Cross River State killed one person and destroyed about 300 houses in Bansan and Irruan communities in Boki Local Government Area of the state.
According to an eyewitness, the rainstorm which started at about 3:00pm, was due to a downpour that lasted four hours.
The storm pulled down trees and houses, while a 19-year-old girl said to be sitting outside her parents’ house in Irruan community was killed.
Speaking on the development, Director General of the State Emergency Management Agency (SEMA), Mr. John Inaku, told newsmen in Calabar yesterday that the rainstorm destroyed no fewer than 72 houses in Bansan community and killed a 19- year-old girl, while 228 houses were equally affected in Irruan community.
He said: “I have been to both communities. A 19-year-old girl died while over 300 houses were affected in both communities. This administration is a listening one and efforts are being put in place to assist the affected communities with relief materials to alleviate their plight.”
Reacting, Hilary Bisong, member representing Boki II State Constituency in the House of Assembly, described the incident as “unprecedented and terrible.”
Bisong, who also visited the communities to console the victims, said he would work closely with SEMA to ensure that the affected communities were given relief materials.
The lawmaker urged the communities to be their brothers’ keepers by accommodating victims and to render other necessary assistance pending when help will come from the government. -The Sun