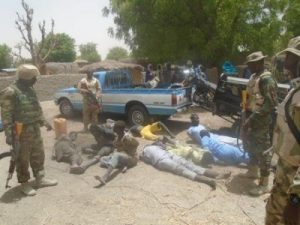 Nigerian troops deployed in the ongoing operation Lafiya Dole in the North East have captured nine members of the Boko Haram sect who were hiding in fox holes in the Borno State.

The Acting Director, Army Public Relations, Col. Sani Usman, said in a statement on Monday that the troops of the 22 Brigade Garrison, captured the insurgent during a clearance operation at terrorists hideouts of Cinga, Mallum Maja, Bosuma and Murye villages.

“The terrorists hibernating in Cinga, Mallum Maja, Bosuma and Murye villages, were armed with dangerous weapons and have been terrorizing the communities. During the operations three Boko Haram terrorists were killed while nine of them who tried hiding in foxholes and dug outs were identified and captured alive.”

He added that the troops recovered 300 cattle rustled by the Boko Haram and handed them over to their rightful owners. -Nigerianeye

Buhari thanks Obasanjo, educates him on successes to this point