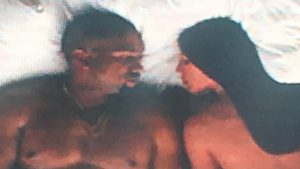 Kanye West is always known to push the envelope, but people are still trying to grasp what they just witnessed.

Kanye premiered the visuals for his hit track “Famous,” fresh off of The Life of Pablo, during a big event Friday night at the Forum in Los Angeles, which was also live-streaming on Tidal. Kim Kardashian, along with Kylie Jenner, Kris Jenner, Corey Gamble, Tyga, Game, Scott Disick,Kourtney Kardashian French Montanaand more stars all attended the event.

And what did we see? Well, Taylor Swiftwas definitely included. It opened with a brief snippet of Taylor from an awards show and background audio of the VMAs (of course), but then we were given one steady visual the entire way through—and it was completely naked stars (except, it wasn’treally them) posed in a way that’s reminiscent of a Michelangelo painting.

The extremely realistic (and uncensored) bodies included Rihanna, Kim, Caitlyn Jenner, Chris Brown, Ray J, Amber Rose, Donald Trump, Anna Wintour, George Bush, Bill Cosby and you guessed it, Taylor. We could try to guess what these bare bodies were doing all in bed together, but we think you get the picture.

At the end of the video, a text message thanks all of the celebs by name “for being famous.”

“I wanna thank Eli first of all who was in the project every day …I don’t wanna give away how it all happened,” Kanye told the crowd. “I wanna thank all my family, my wife, and y’all supporting ideas and truth. I got one question though. Would you like me to play that back?

Speaking to Vanity Fair, Kanye explained that the video, “It’s not in support or anti any of [the people in the video]. It’s a comment on fame.” And it was important he had Kim’s blessing. “[I say] a lot of lines other wives would not allow a husband to say,” he said. “But my wife also puts up photos that other husbands wouldn’t let them put up. One of the keys to happiness in our marriage is we’re allowed to be ourselves.”

Fans were especially eager to see what Yeezy had in store for this single because it has already gained massive amounts of controversy for its famous (pun intended) Taylor Swift -insulting lyric: “I feel like me and Taylor might still have sex / Why? I made that bitch famous.”

Shortly after the song was released, Swift restarted her feud with Kanye and claimed he never asked her for permission.

‘Ye continued to say otherwise, and the two have been going back-and-forth ever since the track hit fans’ ears. There was no saying what the truth of the situation was, but Kim Kardashian weighed in on the whole debacle in the latest issue of GQ where she called out T. Swift.

“She totally knew that [“Famous”] was coming out. She wanted to all of a sudden act like she didn’t,” Kim told GQ of Swift’s reaction to the song. In fact, the reality star says there’s “video proof” of Kanye’s phone call with the singer, who “totally approved that [line].”

She also said the “Style” songstress was using the opportunity to “play the victim” even though she was in on it from the start.

“I swear, my husband gets so much s–t for things [when] he really was doing proper protocol and even called to get it approved,” Kim said. “What rapper would call a girl that he was rapping a line about to get approval?”

She added, “Rick Rubin was there. So many respected people in the music business heard that [conversation] and knew.” -E News

Amaechi: Okonjo-Iweala begged me not to say Nigeria was broke