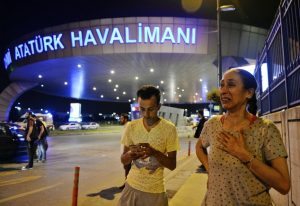 Up to 50 people have died with dozens more injured in a gun and bomb attack on Turkey’s busiest airport.

A senior Turkish official said initial signs are that ISIS was behind the atrocity.

Two suicide bombers opened fire before blowing themselves up at the main entrance to the building, officials said.

Police shot at them to try and stop them before they reached a security checkpoint at the arrivals hall. -UK Metro

Herdsmen have taken over our land – Agatu monarch