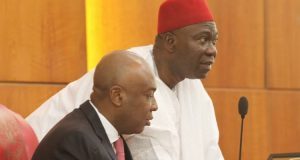 The arraignment was botched last week follow­ing the inability of the court bailiff to effect summons on them.

The duo alongside Sal­isu Abubakar Maikasuwa and Benedict Efeturi were dragged to court in charge number CR/219/16 by the Attorney-General of the Federation and Minister of Justice for allegedly tamper­ing with the standing rules to conduct election that brought them into office.

Ever since the case was filed againt Saraki and Ekwerema­du, there have been anxiety about their fate. Some law­makers fear that if they are not granted bail, there will be vacuum in leadership when the Senate reconvenes.

Trouble started when ag­grieved senators, belonging to the Unity Forum, headed by Barnabas Gemade petitioned the police alleging forgery following the election of prin­cipal officers for the Senate.

Following a request for substituted service by the prosecution counsel, David Kaswe, the trial judge had ordered that the accused persons be served with the charges by pasting the notice on the board of the National Assembly in line with the provisions of Sections 123 and 124 of the Administra­tion of Criminal Justice Act 2015.

Meanwhile, fears are mounting that when Saraki and Ekweremadu appear in court, they might be remand­ed in custody pending when they would perfect their bail conditions.

In the event that happens, Order 27 of the Senate Stand­ing Rules, which makes provi­sion for a temporary Senate president would be activated.

According to it: “In the absence of the president of the Senate and the deputy president, such Senator as the Senate may elect for the purpose, shall be known as president pro-tempore.”

It was gathered that the Like Minds faction of the All Progressives Congress (APC) loyal to Saraki with support from the opposition Peoples Democratic Party (PDP) which controls a sizeable number in the Red Chamber, might produce the president pro-tempore. Shaaba Lafiaji (Kwara North) and Abdullahi Adamu (Nasarawa West) are being touted as likely tempo­rary replacements.

Members of the Unity Forum are also said to be plot­ting to produce a president pro-tempore. Sources said Ahmad Lawan who was hitherto penciled down to emerge, as Senate President in June 2015, would likely be nominated.

There have been insinua­tions that the presidency was desperate to oust the Senate leadership and install a candi­date anointed by the APC.

In fact, the Senate, last week accused President Muham­madu Buhari of plotting to muzzle the legislature and criminalize legislative process in the country.

Also, 30 Senators on the platform of the Peoples Democratic Party (PDP) led by Deputy Senate Minority Leader, Emmanuel Bwacha, who addressed the press in Abuja, vowed not to cooperate with Buhari-led administration over what they called “unwarranted threats to the legislative arm of government, particularly to the Senate leadership by the executive arm, as well as the on-going intimidation and persecution of the opposition party PDP by the ruling party APC.”

They accused the presi­dent of persecuting their party members in the guise of fighting corruption, while pampering his party members who have corruption allega­tions hanging on their necks.

The lawmakers made good their threat when they de­clined to consider the list of ambassadorial nominees sent to it by the president.

The frosty relationship has continued.

Buhari has remained silent since the drama between the presidency and the Senate began.

However, a civil soci­ety group, Centre for the Advancement of Literacy and Leadership, faulted the Attorney General of the Fed­eration, on the arraignment of the presiding officers and for refusing to appear before the Senate on Thursday.

The group, which spoke in Abuja through its Executive Director, Mazi Bismarck Oji, described the AGF as “a serial abuser of the rule of law and the principle of separation of power”.

“We read the statement by the Office of the Secretary General of the Federation on the arraignment of Saraki and Ekweremadu with seri­ous worry for the Nigerian democracy. It is sad that the Attorney-General who sues people to court would not himself honour parliamentary summons, thereby constitut­ing himself an untouchable institution.”

Oji called on well-meaning Nigerians and the interna­tional community to rise up to save Nigeria’s democracy from impunity and executive highhandedness before it is too late.

Similarly, a traditional ruler in Enugu State, Igwe Hafford Agana alleged hatred and with-hunt as the main reasons behind the trial of Ekweremadu.

Addressing a press confer­ence in Enugu yesterday, Agana warned that the devel­opment posed serious threat to the largest democracy in Africa.

Igwe Agana said the inter­national community should, as a matter of urgency, call on Buhari to refrain from actions capable of derailing Nigeria’s democracy.

He identified the Niger Delta militancy, Biafra resurgence, harsh economy as issues that should occupy the President instead of pursuing those that did not vote for him in 2015. -The Sun